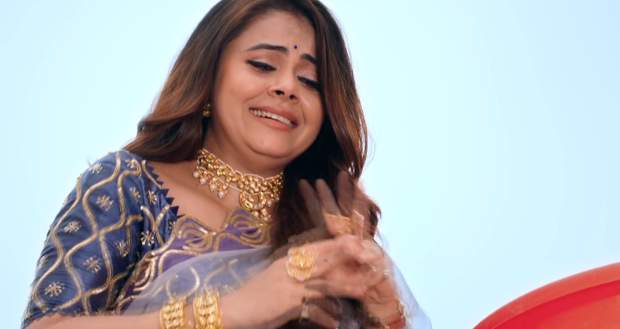 Today's Saath Nibhaana Saathiya 2 (SNS2) 31 Oct episode starts with kids making a drawing for Praful and Jamna. Praful and Jamna get happy to see the drawing while Chetan and Hema gain points because of their kids.

Kanak and Pankaj know their trick but have to support them. Praful and Jamna think their kids are very respectful.

Kokila and other elders leave for the temple while Gopi thinks she is late for the Akhaada. Gehna asks Anant to drop Gopi and herself also tags along to show the directions.

Meanwhile, Ahem takes blessings from god and his guru and later rushes to get Krishna’s necklace. Anant’s car splashes mud on his face while Gopi is not able to recognize him.

She later goes up on the terrace and finds Ahem. Gopi puts water on Ahem and sees the Gopi name’s tattoo on his hand.

Gehna falls on Anant while Ahem asks Gopi to stay away from him. Anant leaves and asks Gehna to leave in the cab while Gopi tries to stop Ahem from going.

Gehna comes there and asks Ahem to talk to Gopi. Gehna wants him to stay while Gopi Kaka is ready to stay if Gopi stays away from him.

Gehna promises him that Gopi will not come around him. Later, Anant gets shocked to learn that her mother and Kokila are searching for a bride for him.

© Copyright tellybest.com, 2018, 2019, 2020. All Rights Reserved. Unauthorized use and/or duplication of this material without written permission from tellybest.com is strictly prohibited.
Cached Saved on: Tuesday 1st of December 2020 11:18:30 AM