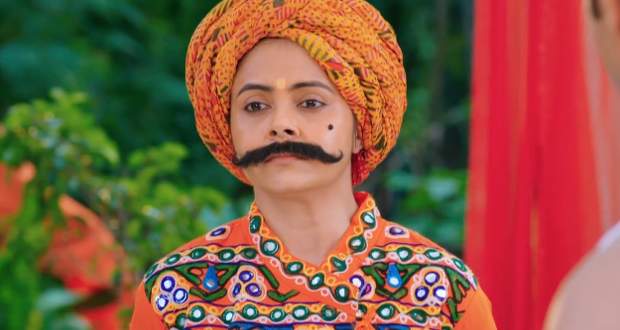 Today's Saath Nibhaana Saathiya 2 (SNS2) 3 Nov episode starts with Gehna introducing Gopi to her flowers. Gopi gets hurt by a stone while Gehna treats her wound. Ahem shares with his friends how Gopi looks.

Gopi dresses like a Rajasthani man and meets Ahem. She introduces herself as Ahem and wishes to learn wrestling from him.

She asks Guruji if she can live with Gopi Kaka to learn everything from him. Ahem thinks Gopi is not a wrestler and wants her to fight with him.

Gopi gets scared to fight with him but still agrees. Meanwhile, Gehna makes food especially for Anant while Jamna asks her to be there when Anant eats.

The fight between Gopi and Ahem starts while Gopi has learned a few tricks from the internet. She uses the trick and Ahem falls on the ground.

Ahem holds Gopi’s Pagadi while Gopi gets scared that she might get caught. Gopi uses another one of her tricks and beats Ahem in the match of wrestling.

Gehna also comes there and distracts Ahem. Meanwhile, Kanak wants to know how much money they will get while Chetan also wants to know the amount.

Ahem introduces Gopi to Gehna and later Gopi thanks Gehna for helping her. Gopi asks Gehna to not suffer pain when it is for wrong.

At the lunch table, Pankaj wants to know when he will deposit the check to withdraw the amount. Anant suggests putting all the money in an FD.

Upcoming Saath Nibhaana Saathiya 2 episode update: Anant stands up for Gehna and asks Kanak to give her food properly.

© Copyright tellybest.com, 2018, 2019, 2020. All Rights Reserved. Unauthorized use and/or duplication of this material without written permission from tellybest.com is strictly prohibited.
Cached Saved on: Tuesday 24th of November 2020 11:01:58 PM