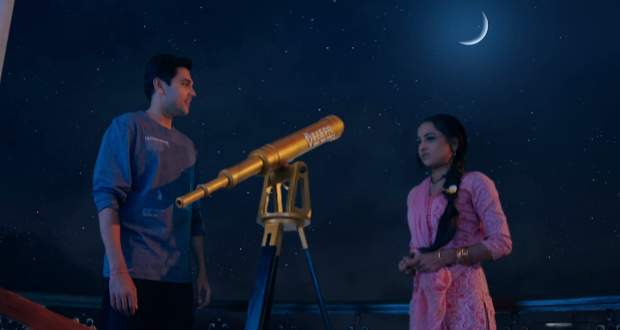 Today's Saath Nibhaana Saathiya 2 (SNS2) 5 Nov episode starts with Gehna wishing to ask something from Gopi. She wants to know her relationship with Ahem while Gopi reveals he is her first husband.

Gehna asks Gopi to keep a flower near her pillow which will help her solve problems. Gopi says she can’t have Ahem back in her life but wants to reunite the mother-son duo.

Gehna makes a Matki and further makes a portrait of Anant. She thinks he is a God who gave her food and treats her really well.

She starts making the picture of the moon and sky while at the same time, Sagar comes there. He threatens her and throws away the image.

The image goes straight to Anant who is watching stars. Meanwhile, Ahem asks Gopi how she found him while Gopi says she found him on the internet.

Sagar tries to take advantage of Gehna but Anant comes and saves her. He asks what Gehna and Sagar are doing there while Gehna reveals she will stay there for a few days.

Anant asks Gehna to stay in the guest room and asks Sagar to not worry about Gehna. Later, Gehna sees stars with Anant and also cleans his room.

Gopi comes home in a saree and Sagar and Hema confront her about her wet hair. She makes excuses while Hema again calls out her name.

© Copyright tellybest.com, 2020, 2021. All Rights Reserved. Unauthorized use and/or duplication of any material from tellybest.com without written permission is strictly prohibited.
Cached Saved on: Friday 6th of August 2021 01:42:23 AM