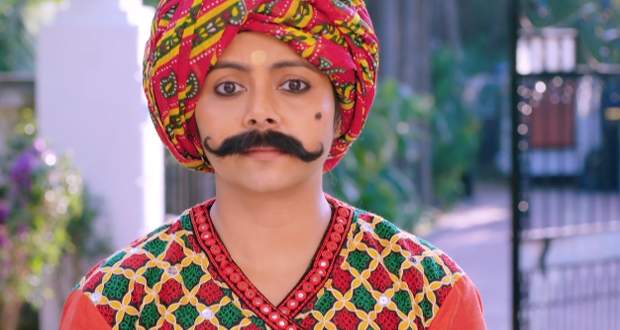 Today's Saath Nibhaana Saathiya 2 (SNS2) 6 Nov episode starts with Anant helping Gehna see the stars through the telescope. Gehna gets emotional as she thinks her parents are now a star and can see them up close.

In the morning, Praful praises Gehna while Kanak fumes in anger. Further, Praful states they have decided to give some amount of the cheque to Gehna.

Everyone is left in shock but can’t speak in front of Anant. Later, Anant and Gehna see the oil lamp flickering and put their hand to save it from blowing off.

Gehna tells Hema about Sagar’s bad behavior while Hema rebukes her for suggesting such a thing. She wants her to be in limits and not join her name with him.

Elsewhere, Kanak feels threatened by Anant and Gehna and wants Anant out of the house immediately. She fears he will put all the money in an FD.

Kanak and Pankaj see Gopi dressed as a man and wonder who he is. Later, Ahem questions Gopi while she lies about being near the river and doing Yoga.

Ahem leaves while Gopi calls the doctor. The doctor asks Gopi to bring someone close to Ahem in front of him to bring his memory.

Gopi asks Kokila about her return while Kokila feels Gopi is in some danger. Kanak gets upset with Gehna teaching the kids and offers to show her place.

Anant wants to know why Gehna didn’t complete her studies while Gehna lies. Kanak rebukes Gehna for sitting on Sofa while Anant points her rude behavior.

Kanak changes the topic and says the Sofa will get dirty because of her dirty clothes. Later, Anant tells Praful and Jamna about Kanak’s behavior towards Gehna.

Praful thinks Anant is thinking too much and states that he will give an equal share to Gehna from the check.