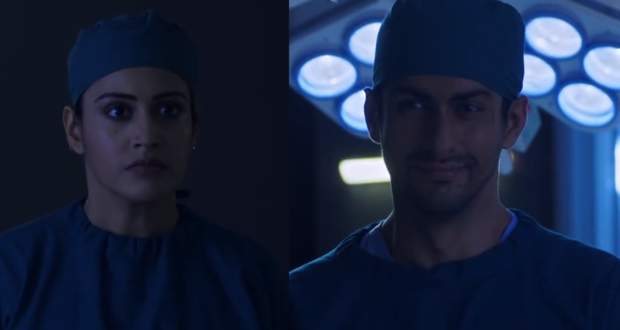 Today's Sanjeevani 2 13 Aug episode starts with Ishani still arguing with Siddhant over his hideous deeds. At the same time, a guy rushes to the hospital with an almost dead girl.

Meanwhile, Dr. Shashank operates the small boy who was rescued by Sid.

Ishani and Sid are trying to save the girl. Ishani follows Sid’s instructions and successfully stabilizes the patient.

Anjali confronts Shashank for not choosing her as the head of the hospital. He gets unconscious after getting out of the lift. He tells Anjali to call Juhi.

At the same time, Dr. Juhi is in a flooded camp rescuing and treating the victims. She receives a call from Anjali stating that Shashank is critical and has a brain tumor.

Juhi doesn’t answer and Anjali gets upset with it. Later, Dr. Rishabh Vaidya introduces himself to first-year residents.

Ishani discovers the girl brought in for treatments thinks that she is dead. She asks to get her to the psychiatric ward for treatment.

She further gets worried when she realizes Vardhan already knows about her parents. Asha informs her that the senior resident is calling her in OT.

Later, she finds out her senior resident is none other than Dr. Siddhant who she wanted to complain about.

© Copyright tellybest.com, 2018 & 2019. All Rights Reserved. Unauthorized use and/or duplication of this material without written permission from tellybest.com is strictly prohibited.
Cached Saved on: Sunday 7th of June 2020 01:14:26 AM