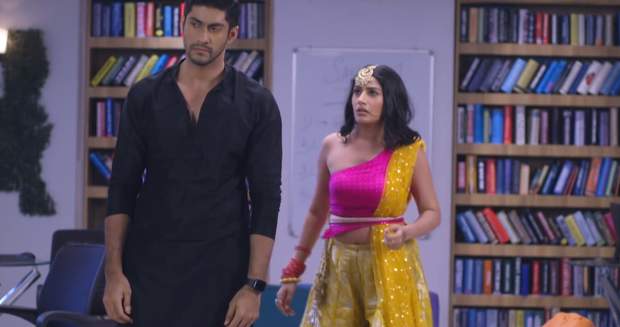 Today's Sanjeevani 2 15 Oct episode starts with Rahil complimenting Sid and Ishani’s Jodi. Sid gets mad at him for talking unnecessarily and further gets upset to see Ishani’s name written on his wrist.

Anjali thinks Vardhan is giving her gift but he has brought the earrings for Jessica. Later, Anjali makes it clear she is not interested in him.

Sid remembers past moments with Ishani and deduces she loves him. Meanwhile, Anjali feels guilty for taking her anger out on Vardhan and talks to him.

Anjali takes him by the hand and decides to announce something. At the same time, Sid scratches Ishani’s name off his wrist with his nails.

Ishani gets delighted to see Sid’s name on her hand. Sid doesn’t want love in his life and Rahil says they were just kidding.

Later, Sid and Ishani bump into each other and fall on a bean bag. Sid sees his name written on Ishani’s hand and pushes her away.

Sid wants Ishani to stay away unless there is a medical emergency. Ishani gets shattered with Sid’s words while Sid doesn’t want history to repeat.

Ishani shares her pain with Asha while Sid is sitting alone and doesn’t react properly to the nurse’s question.

Ishani doesn’t want to stay alone or lose Dr. Sid. Asha advises Ishani to hold on to Sid and never let him go. She runs to find Sid.

Upcoming Sanjivani 2 episode update: Ishani runs towards Sid and falls down while Sid doesn’t help her.