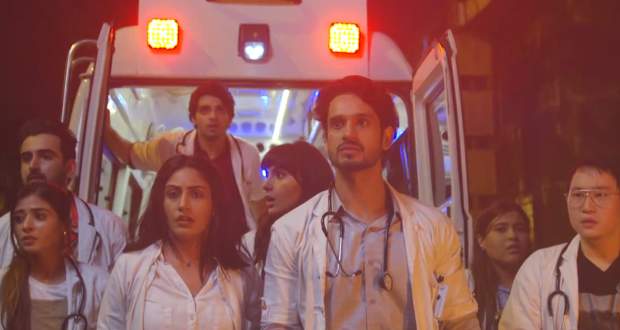 Meanwhile, Vardhan calls Dr. Sid urgently while Ishani reveals she has sent the video to Vardhan, Anjali, and Shashank from the cloud storage of her phone.

Juhi starts giving him shock treatment. Shashank loses his breath for a moment but starts breathing again. She later gets unconscious.

Everybody at the hospital praises Dr. Juhi while Dr. Sid also celebrates the success in his unique way by breaking an earthen pot.

Later, Dr. Asha introduces Ishani to her childhood friend Dr. Aman. Ishani uses her skills to deduce Aman is having a hangover.

At the same time, Dr. Rishabh informs about a major accident and that he wants all the residents to come with him at the place of incident.

He gives instructions to everyone in the van and they later reach the sight of a major accident.

© Copyright tellybest.com, 2018 & 2019. All Rights Reserved. Unauthorized use and/or duplication of this material without written permission from tellybest.com is strictly prohibited.
Cached Saved on: Thursday 16th of July 2020 07:01:50 PM