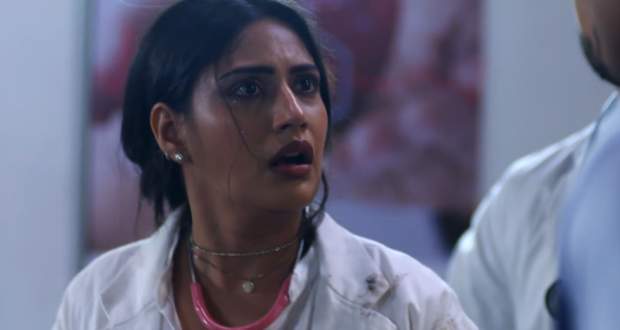 Today's Sanjeevani 2 21 Aug episode starts with Sanjivani team arriving at the site of the accident. Meanwhile, Sid’s mother gets mad at him for being busy at work and not coming home.

At the same time, Shashank gets conscious and wants Juhi to accept the post of chief of surgery. Juhi and Anjali are called at the emergency ward to treat patients.

Doctors on the sight of the accident continue to treat patients. At the same time, Vardhan tries to provoke Anjali against Juhi.

There is havoc at the sight of the accident as all doctors are struggling to keep up with the patients. Ishani tries to climb a car and is saved by Sid.

Sid tries to work with everyone and gives the required instructions. Ishani finds a girl with an iron rod in her stomach stuck in a car.

Rishabh tries to get in a fight with Dr. Sid and gets a punch in the face in return. Meanwhile, Ishani tries to treat the daughter of the terrorist.

The media and some people try to stop Ishani from treating the terrorist’s kid. Dr. Sid comes to the rescue and helps Ishani in taking the girl to the hospital.

Vardhan sees the news and comes to know about Ishani bringing the terrorist’s daughter. He changes his attitude in front of the media and says they will treat the girl only in extreme case.

Later, Vardhan tells the nurse to remove the little girl from bed and stop the treatment.

© Copyright tellybest.com, 2018 & 2019. All Rights Reserved. Unauthorized use and/or duplication of this material without written permission from tellybest.com is strictly prohibited.
Cached Saved on: Tuesday 14th of July 2020 03:57:16 PM