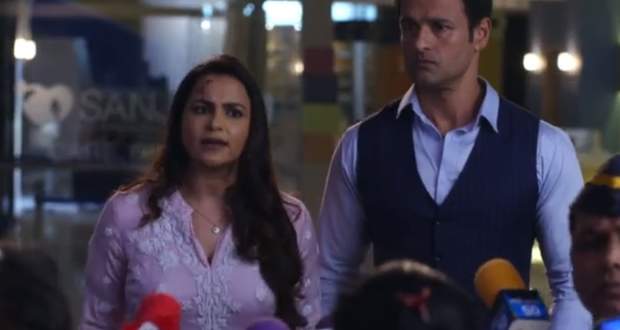 Today's Sanjeevani 2 23 Aug episode starts with Sid getting shocked to see Dr. Rishabh in the operation theatre. Sid threatens to break his bones if he doesn’t leave the OT.

Rishabh takes the photographs of him operating on Sanya and leaks the pictures to media. Meanwhile, Vardhan fixes a meeting with Dr. Rahul.

Later, he gets angry with the operation of Sanya but Dr. Juhi stops him from entering the OT. They get in an argument over rules and regulations of Sanjivani.

Dr. Juhi further accepts the post of chief of surgery offered by Dr. Shashank. She comes out to talk to media but gets hit by a stone instead.

She admits in front of media that Sanya is in Sanjivani and they are trying to save her. At the same time, Dr. Ishani removes the rod from Sanya with a splash of blood on her face.

She remembers the memories from the past and realizes the similarity between her and Sanya.

Meanwhile, Juhi effectively handles the media while Vardhan interrupts her and tries to take all the credit with his fake story.

Later, Sid comes to comfort Dr. Ishaani and tries to make her smile.

Juhi meets Dr. Shashank and says she will try her best to save Dr. Sid. At the same time, everybody starts criticizing Ishani for complaining against Dr. Sid.

Vardhan compares the situation of Dr. Sid with Ishani’s parents and tries to manipulate her.