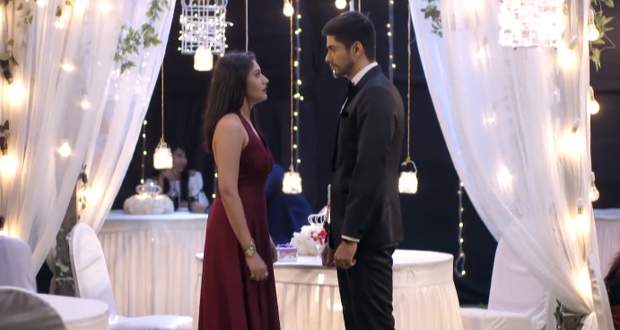 Today's Sanjeevani 2 28 Oct episode starts with Sid waking up in Ishani’s arms and getting shocked. He immediately stands up and tries to get away from Ishani.

Ishani reminds him of everything he said the other night and calls him a lucky charm. She confesses that she has fallen in love for the very first time.

She tries to console him in believing that life is unpredictable and anything can happen. She further asks him to come at 8 pm and is sure he will come.

Meanwhile, Shashank is disturbed about Anjali and her behavior. Later, Anjali comes into her room to find Shashank sitting there.

Anjali feels weird when Shashank doesn’t say anything to her. Meanwhile, Ishani prepares for the night and shops for various stuff.

Later, Sid gets restless and remembers the moments spent with Ishani. Also, Ishani waits for Sid in the hotel while Sid gets ready.

Sid arrives in a suit to meet Ishani and compliments her. He says I love you to her while she sits on one knee. She asks him if will be her lucky charm.

She further proposes him through fireworks but it all turns out to be Ishani’s dream. The waiter tells her that it is 12 midnight and she wonders where Sid is.

Upcoming Sanjivani 2 episode update: Sid gives surprise to Ishani in the form of his wife.