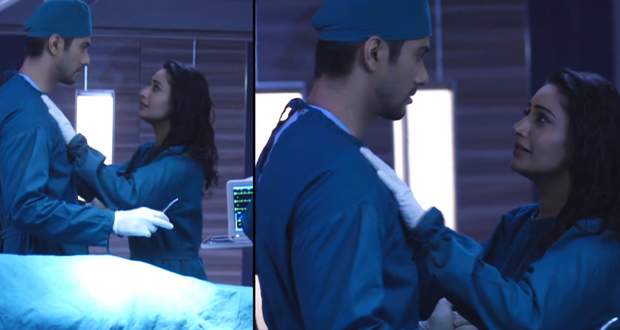 Today's Sanjeevani 2 30 Sep episode starts with Ishani running away from Sid while Sid wonders what has happened to her. Later, Dr. Rahil comes and wants Sid to believe he loves Ishani.

Ishani tells the story of a monster and princess to a small girl patient. She relates her story with Siddhant with the monster and the princess’s story.

Ishani calls Sid a hero and the girl wishes to meet him. Sid arrives at the same time with his sweet dish, Halwa.

He entices Ishani by making the small girl eat the Halwa. Later, he asks to bring more halwa and feeds it to Ishani.

Ishani goes in the washroom and thinks she is having a stroke. She gives herself a pep talk and decides to remove love from her life.

Ishani later joins Sid in surgery and is not able to concentrate on her work. She acts weird and removes her lab cap. She says she just thinks about him all day but it all turns out to be a dream and she returns to her senses.

Sid gets shocked when Ishani doesn’t argue with him. Ishani again finds her heart rate increasing and leaves the operation theatre.

Dr. Rishabh also comes in the OT and says he will do the operation. Meanwhile, Ishani gives her cases to Asha while Sid again calls her for a case.

Sid and Ishani meet Jessica and Jignesh and start fighting over their relationship problems.

Upcoming Sanjivani 2 episode update: Sid gets mad at Ishani for not working properly in the hospital.

© Copyright tellybest.com, 2018 & 2019. All Rights Reserved. Unauthorized use and/or duplication of this material without written permission from tellybest.com is strictly prohibited.
Cached Saved on: Monday 10th of August 2020 02:45:53 PM