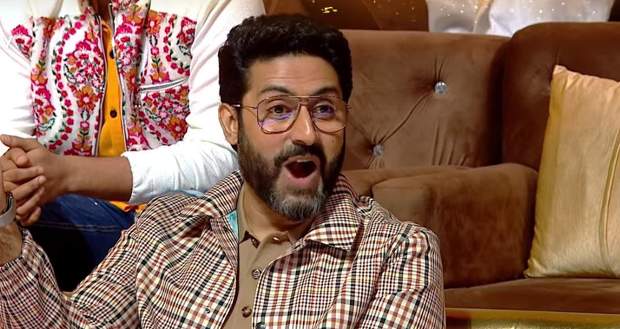 Zee TV's Sa Re Ga Ma Pa 2021 is entertaining the audience this week with the special appearance of the well-known celebrity Abhishek Bacchan AKA AB along with Salman Khan.

SaReGaMaPa's recent promos for this weekend (27-11-2021, 28-11-2021) episode shows the famous actors Abhishek Bacchan and Salman making their entry and getting amazed by the contestant's performances.

Download SaReGaMaPa 2021 or live stream the latest episode on both Zee TV and OTT platform Zee5.

The first performance is given by Vraj Kshatriya along with Yumna on the song 'Chogada' that brings Ayush on the stage to dance.

The next duet performing is Sanjana Bhat and Neelanjana Roy and they sing the songs 'Kahe Tose Sajna' and 'Tere Naam'.

The show continues with the performance of Arvind Nair and Snigdhajit Bhowmik who sing the 'O O Jaane Jaana' song.

The last performance of the episode is given by Sharad Sharma, Farhan Saabir, and Raju Nadaf.

They sing the song 'Bhar Do Jhooli Meri' and impress the judges and guests.

Today's SaReGaMaPa 28th November 2021 episode starts with Abhishek Bacchan and Chitrangana Singh entering the stage of SaReGaMaPa 2021 for the promotions of Bob Biswas.

Tonight the performances are in duets and groups.

So, the first duet performance of the night is performed by Sachin Kumar and Rajashree Bag on the songs 'Dekha Ek Khwaab' and 'Aisa Lagta Hai'.

Dipayan Banerjee and Neelanjana Roy come in to perform the song 'Tere Mere Milan Ki Ye Raina' that amazes everyone on SaReGaMaPa.

The show continues with a rocking performance of Sanjana Bhat and Ananya Chakraborty on the songs 'Masakali' and 'Rang Barse'.

Raje Nadaf, Farhan Saabir, and Yumna's performance on the song 'Apni Tho Jaise Taise' which gets everyone on their feet.

Laj and Vraj Kshatriya come in next and perform the songs 'Aaj Rapat Jaye Tho'.

The next performance is given by Arvind Nair, Sharad Sharma, and Snigdhajit Bhowmik who sing the song 'Desi Girl' and get everyone on their feet.

As a surprise for Abhishek, a video is shown representing Abhishek's journey in Bollywood.

Kinjal Chatterjee and Anshika Chonkar continue the show performing the song 'Tere Bina' which is loved by all.

Everyone comes on the stage to sing and dance to the 'Kajra Re' song.

Aditya announces that Sanjana, Sharad, and Snigdhajit as safe by the audience voting.

Lastly, Aditya uncovers the elimination names and the contestants whose journey ends on SaReGaMaPa 2021 are Kinjal and Farhan.

© Copyright tellybest.com, 2020, 2021. All Rights Reserved. Unauthorized use and/or duplication of any material from tellybest.com without written permission is strictly prohibited.
Cached Saved on: Thursday 20th of January 2022 12:33:50 PMCached Disp on: Friday 21st of January 2022 05:25:02 PM