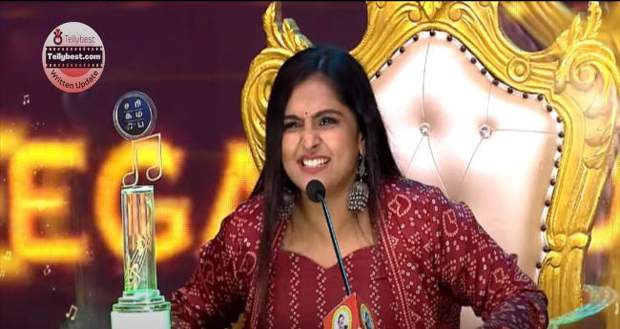 Today's SaReGaMaPa Tamil episode starts with VJ Archana welcoming the judges and the panel members to the mega audition round. The contestants who are selected get a medal.

Manikandan gives the first performance of the episode. He impresses the judges by singing Ennoda Raasi song and gets selected immediately.

We see a small introduction video about Manikandan from Agathiyar falls. He tells everyone about his passion for music. The judges expressed their wish to see him in the finals.

Archana calls his niece on stage to surprise him and wish him luck.

Chimmu delivers a delightful performance of Poraane Poraane song and gets selected almost immediately as soon as she starts singing. All the judges are so impressed by her and compliment her for the kind of professional performance she gave.

Archana asks her about the meaning of her name to which Chimmu gives funny answers. Her sister is also called on stage to support her.

Nagarjun gives such a melodious performance of Kanaala Kanne song. No one is able to resist this beautiful performance.

Archana gives him a hug and welcomes him to SaReGaMaPa. The judges ask Nagarjun about his knowledge of music. He tells everyone how he never had singing classes or even touched a mic ever before in his life.

He tells about how his father died at an early age and always wanted him to be a singer. We see some glimpses of his home and him at work.

He talks about his passion for music. The judges happily welcome him to the show.

Vishnu gives a fun-filled performance of the Raakamma song. The judges clap along and enjoy the performance.

His wife and daughter are happily cheering for him as he gets selected.

We see a beautiful introduction video of Anupa Anto from Kanyakumari. Her father is a fisherman. She has been a choir singer in church since she was really young. The priest in her church blesses her and sends her off to SaReGaMaPa show.

She delivers a beautiful carnatic song and gets selected. She jumps on the stage with excitement about getting selected.

Her family is called on stage to share happiness. Anupa’s sister is also a beautiful singer and she sings an amazing song and shocks the judges.

The judges are stunned by her sister’s performance so they give her a medal as well and select her on spot without any official entry for an audition.

Vijayabasker gives an impressive performance of Aavi Parakum song and gets selected.

Later, tells everyone that he is from Ramanathapuram, he works in a bar as a waiter and earns 183 rupees per day. His passion for singing helped him overcome depression.

He has a beautiful son and wants to give him a better life.

Bavadhariini gives a melodious performance of Snegidhane song and gets selected.

The judges say that they are finding it difficult to reject anyone because everyone is delivering beautiful performances.

The last performance of the episode is Guruprasad from Coimbatore. While he talks he has a stammering problem but while singing he never had that issue.

He gives a mind-blowing performance of Kannama song and gets selected instantly. He receives a standing ovation from the panel members and judges. His mother comes to the stage to hug him and congratulate him.

To get to know more, keep watching Saregamapa Tamil Season 3 on Zee Tamil TV or zee5.com.