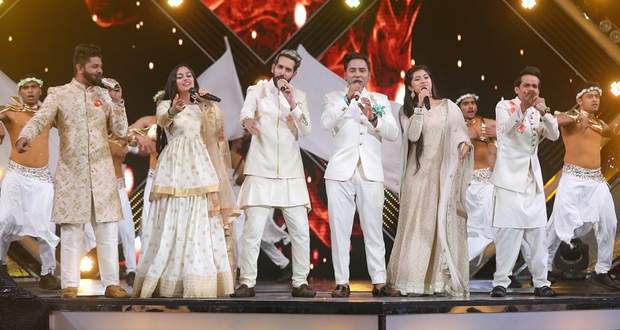 Richa Sharma performed on her popular songs like Mahi Ve and Sajda.

Then, Sunidhi Chauhan and Javed Ali brought the winner’s trophy on the stage.

Kangna Ranaut and Ankita Lokhande walked on the stage to promote their movie Manikarnika.

Kangna Ranaut crowned Ishita Vishwakarma to be the shaan of the show.

Aslam Abdul Majeed and Sunidhi Chauhan took our heart away by their soulful performance.

Aishwarya and Sunidhi Chauhan’s performance followed Their performance. They performed on Parda Parda.

Sunidhi Chauhan set the stage on fire with her performance. She sang a few of her many hits.

Sonu Gill was announced as the second runner up, and Tanmay Chaturvedi was awarded as the first runner up.

Later, Ishita Vishwakarma was announced as the winner of Saregamapa 2018.

© Copyright tellybest.com, 2020, 2021. All Rights Reserved. Unauthorized use and/or duplication of any material from tellybest.com without written permission is strictly prohibited.
Cached Saved on: Monday 6th of December 2021 04:29:47 PM