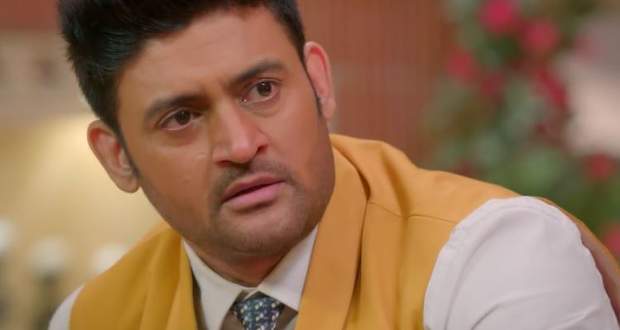 Today's Shaadi Mubarak 12 January 2021 episode starts with Preeti and KT secretly speaking in the washroom and Nandini suddenly knocks at their room's door.

Later, KT makes sure that Nandini didn't notice Preeti and says to Nandini that he was speaking on the phone.

Later, Nandini offers an Almond milkshake to KT and suddenly it spills on her saree. Nandini goes into the washroom while Preeti hides in.

KT is tensed about Preeti as she hides in the bathtub. As soon as Nandini goes out of the washroom, KT takes her out.

Further, KT asks Preeti to promise him that she won't do any such action in the future while Preeti feels strange and leaves.

Later, Nandini gets skeptical about Preeti and KT while she goes to their room and finds Preeti alone. She feels rest assured when she sees KT sleeping on the couch.

After watching Nandini going to her room, KT takes Preeti to the lawn and says that he wanted to see her.

Upcoming Shaadi Mubaarak episode update: Juhi gets tricked by Nandini and Preeti gets blackmailed to sign the divorce papers.

© Copyright tellybest.com, 2020, 2021. All Rights Reserved. Unauthorized use and/or duplication of any material from tellybest.com without written permission is strictly prohibited.
Cached Saved on: Friday 30th of July 2021 12:18:55 PM