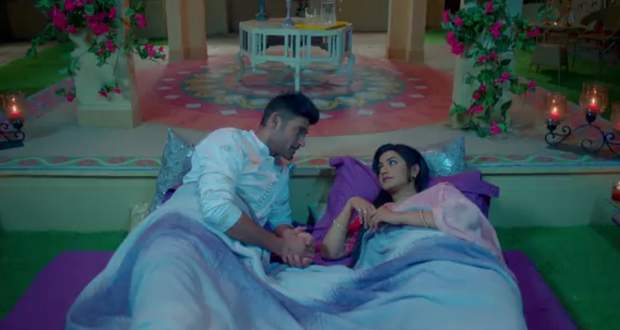 Today's Shaadi Mubarak 30 January 2021 episode starts with KT talking to Neel that he will be able to convince Preeti by his actingbut in actual she is just his friend.

KT says that he can do this much for Preeti as she has stood by his side in all ups and downs.
Neel thinks if KT is doing all this for Preeti's happiness why he cannot leave his love for his family's happiness.
Kushala asks KT and Preeti to book a room in the five-star hotel if their AC not working. Preeti and KT say that they can manage at home itself.
KT appreciates Preeti's idea of spending a night under the shade of stars. Preeti tells KT that she is not mentally prepared for physical relations right now. KT tells her that it's ok, marriage doesn't mean that a guy gets a license on a woman's body unless both are willing.
KT asks Preeti about her likes and dislikes. She tells him that Rajasthani actor KT the superstar is her favourite actor to which KT blushes and her favourite is slowly drinking tea at a tea shop and looking around people enjoying tea is what she enjoys the most.
The next day, KT takes Preeti to the tea shop instead of meeting clients as a surprise. They both love Tea and KT asks her what experience she dislikes the most.
Then, a couple comes in front of them, a guy is shouting at the girl and girl asking him that why are you leaving her without giving any reason. Preeti consoles her and tells KT that breaking someone's heart is what she hates the most.
Meanwhile, Kushala receives Maheshwari's call telling Neel and Shikha's engagement ceremony to be conducted this week. Initially, Kushala is reluctant as Neel is doing his MBA but Maheshwari reminds Kushala about KT and their business.
Maheshwari says that marriage is for Debriwal's benefit so they should be more eager. He says that he will send his family's jeweller to take Neel's measure for the ring. Kushala becomes worried about KT and Preeti's presence at home.

© Copyright tellybest.com, 2020, 2021. All Rights Reserved. Unauthorized use and/or duplication of any material from tellybest.com without written permission is strictly prohibited.
Cached Saved on: Monday 10th of May 2021 03:26:07 AM