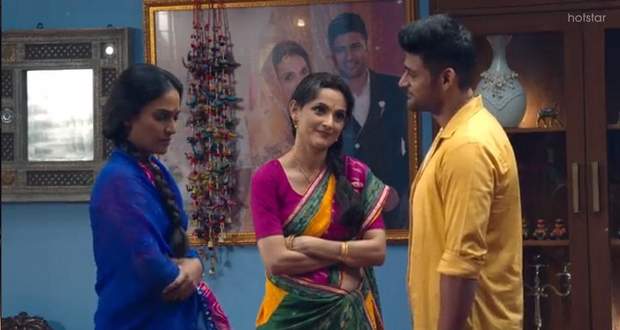 Today's Shadi Mubarak 10 Sep episode starts with Kusum asking Tarun to make Preeti a shareholder in his new house. Tarun gets angry and refuses to give any share to Preeti.

Preeti’s mother-in-law scolds Tarun for not respecting his mother and she praises Juhi for taking care of her mother Preeti. Tarun leaves from there and Kusum asks Rati to follow her husband.

Later, Preeti feels grateful to Kusum for saving her from going to Tarun’s house. Kusum questions Piyu if she found a job or not. Everyone gets happy when Piyu tells them that she got a job.

Kusum asks K.T to sit beside her and to eat the Laddoos made by her. Sumedh questions K.T about his motive to come to their house. K.T tells him that he came to meet Preeti, while Preeti tells K.T that she didn’t mean to talk rudely to him the previous day.

K.T tells everyone that he kept on thinking about Preeti the previous day so he decided to talk to Preeti as soon as possible. He makes an offer to Preeti to be his business partner.

He asks her to not to waste her beautiful talent and asks her to be his partner in his wedding planning business. K.T tells Preeti that he got impressed by her ideas she shared with Chanda in the café.

Preeti tells K.T that she will give her an answer after consulting with her family. She feels confused as she doesn’t want to be K.T’s partner.

© Copyright tellybest.com, 2020, 2021. All Rights Reserved. Unauthorized use and/or duplication of any material from tellybest.com without written permission is strictly prohibited.
Cached Saved on: Saturday 23rd of January 2021 07:21:48 AM