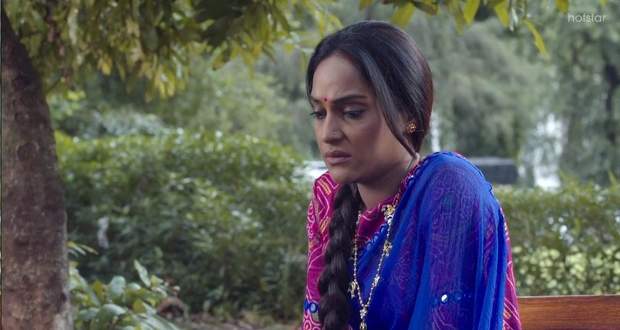 Today's Shadi Mubarak 11 Sep episode starts with Preeti leaving Kusum’s house to go for a walk. Juhi makes a call to Preeti and asks her about her sudden absence from the house.

Preeti tells Juhi that she wasn’t feeling comfortable in front of K.T and asks her to tell K.T to leave.

Preeti witnesses Rati and Tarun arguing with each other on the road. Rati sees Preeti without her slippers and says to her that Kusum should have given the slippers to Preeti before throwing her out of the house.

Preeti informs Rati and Tarun that she is going to start working to earn her self respect. Tarun says hurtful words to Preeti and asks her to work as a maid in everyone’s house.

Meanwhile, Sumedh and Juhi try to make Kusum understand that let Preeti take the decision about her life. Kusum tells them that she will not force Preeti to work with K.T.

Preeti tells Kusum that K.T is a stranger for her and she won’t be able to be a partner of a stranger. Preeti makes a call to K.T and informs him that she doesn’t want to accept his business proposal. K.T gets upset but still wishes best of luck to Preeti for her future.

K.T’s mother scolds K.T's uncle for forcing K.T to work. She gets angry with him and tells him that there is no need for K.T to work as he is already heartbroken.

Further, Juhi asks Kusum to have her lunch, while Kusum gets angry on Juhi for continuously asking to have food.