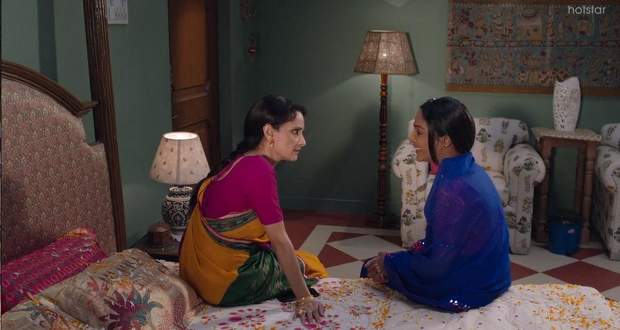 Today's Shadi Mubarak 12 Sep episode starts with Preeti apologizing to Kusum in a unique way. She plays a friendly song for Kusum to calm her anger.

Kusum’s daughter arrives there and asks Kusum to allow her to go to a birthday party. Kusum gets angry on her and answers her in a rude way.

K.T informs his mother that he wants to start working again. K.T’s mother questions K.T about the lady who refused to work with him.

Meanwhile, Preeti asks Kusum’s daughter to give her an idea to convince Kusum. Piyu tells her that is she accepts K.T’s proposal then her mother Kusum will be convinced.

Piyu shares her feelings that her mother Kusum wants to control everyone’s lives. Preeti tells Piyu that Kusum loves her children a lot and she doesn’t want to see anyone hurt.

Preeti tries to make Kusum’s children understand that Kusum loves all of them. Kusum gets emotional while overhearing Preeti’s advice to her children and apologizes to Preeti for her rude behavior.

Preeti informs Kusum that she has got an assignment to manage the Aggarwal’s event. The next morning, Preeti starts working and tells Aggarwal that she has booked everything for the function.

Preeti gets surprised to see K.T disguised as a worker at Aggarwal’s place. Elsewhere, Kusum laughs and tells Juhi that K.T will definitely start his wedding planning business with Preeti.

Kusum and Juhi overhear Piyu talking to someone about the money lost from her account. Juhi asks Piyu to give her account details to her so that she could help Piyu.

Piyu gets angry and tells Juhi that she doesn’t trust her. Kusum scolds Piyu for not trusting her sister-in-law Juhi and for misbehaving with her.

Later, Preeti gets irritated by K.T’s words, while K.T asks Preeti to be sure about her decision to not to work with him. Preeti gets an idea that Kusum informed K.T about her new work assignment.

© Copyright tellybest.com, 2018, 2019, 2020. All Rights Reserved. Unauthorized use and/or duplication of this material without written permission from tellybest.com is strictly prohibited.
Cached Saved on: Monday 30th of November 2020 08:00:13 PM