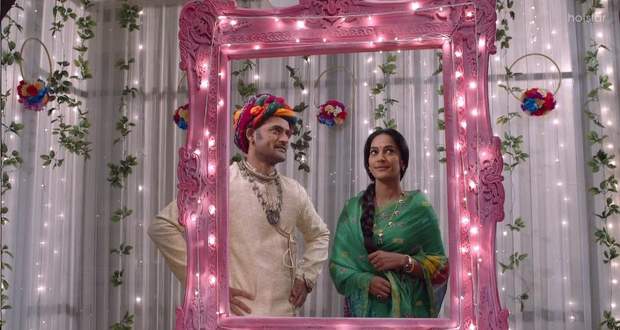 Today's Shadi Mubarak 14 Sep episode starts with K.T trying to convince Preeti to be his business partner. Aggarwal asks Preeti to look at the tube lights and K.T tells Preeti that Aggarwal doesn’t seem to be a nice person.

Preeti gets engaged in completing her work and K.T tries to make Preeti understand that he got a huge positive impact on him after meeting her.

Elsewhere, Kusum questions Juhi about Piyu’s rude behavior towards her. Kusum gets a call and she gets busy talking on the call. Juhi asks Piyu to stay calm in front of Kusum otherwise she would have to tell the truth to Kusum.

K.T keeps on asking Preeti about her decision. Preeti offers K.T something to eat, while Aggarwal tells Preeti that he will pay him half amount for her work.

He misbehaves with Preeti and asks her to leave from his house. K.T listens to Aggarwal speaking rubbish about Preeti, while Preeti is hurt and thinks about how to manage the situation.

Preeti reaches Kusum’s house and gets upset for no one asking her about her work. Kusum recalls K.T asking her to not to ask Preeti about her day.

Kusum tries to engage Preeti in some work till 11 in the night, while Aggarwal arrives there and asks Preeti to complete the work of getting 40 blankets for his guests.

K.T arrives there and tells Aggarwal to behave properly with Preeti. Aggarwal pays the full amount to Preeti and asks Preeti to arrange the blankets.

Preeti makes a call to someone and arranges 40 blankets late at night. She informs Aggarwal that he will get the blankets in one hour. K.T asks Aggarwal to apologize to Preeti for his misbehavior.