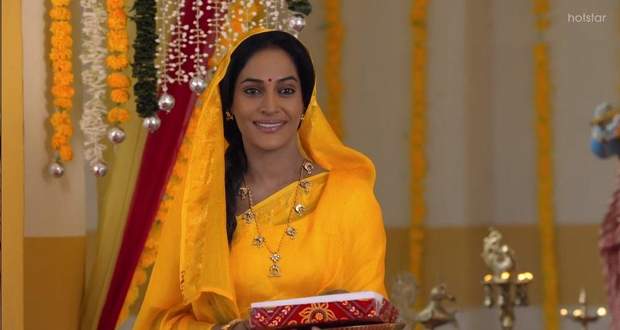 Today's Shadi Mubarak 15 Sep episode starts with K.T ordering Aggarwal to apologize to Preeti. Preeti recalls Tarun’s harsh words when he insulted her by hurting her self respect.

K.T hands over Preeti’s payment to Kusum and leaves from there. Later, Kusum witnesses Preeti grinding something in the kitchen.

Juhi informs Kusum that Preeti used to start the grinder to hide her pain from everyone in the sound of the grinder. She tells Kusum that K.T is the first man to give respect to Preeti.

The next morning, Kusum looks for Preeti everywhere and finds out that Preeti went to the temple early morning. Meanwhile, Preeti invited K.T to the temple and keeps on describing the temple to him.

She tells K.T that they should take blessings from God before starting something new. K.T gets surprised to hear that Preeti is ready to be his business partner.

K.T gets happy and distributes sweets to everyone around. He tells Preeti that he didn’t take bath before coming to the temple.

Preeti tells him that he should take bath before coming to the temple. K.T witnesses a bucket full of water outside the temple and puts the water on himself. Preeti starts laughing at seeing K.T taking a bath in a hilarious way.