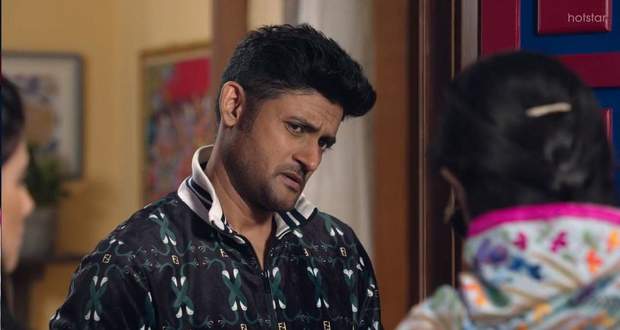 Today's Shadi Mubarak 16 Sep episode starts with Tarun celebrating his promotion with Rati. Tarun informs her that they will get their luxury car in 5-6 months.

Rati tells Tarun that Kusum might have shown her house state to Preeti and that’s why Preeti has decided to work. Rati asks him not to bring back Preeti home and to let her stay at Kusum’s house.

Piyu shows the newly bought things to her family, while K.T arrives there with Preeti. He asks Preeti to hide behind the door so that he can show his talent to her.

K.T tells Kusum to inform Preeti that he has got a new partner, while Kusum tells K.T that Preeti has gone to the temple. Kusum requests K.T to not to leave and asks him to wait for Preeti.

Preeti comes in between their conversation while laughing and tells everyone that she has accepted K.T’s business proposal. Kusum gets happy and asks K.T about what to do next.

K.T informs everyone that his mother has called the priest for the veneration the next day. Later, Juhi and Kusum help Preeti to choose a Saree for the veneration. Kusum tells Preeti that she is feeling jealous of her that she will be spending most of her time with superstar K.T.

Preeti tells Kusum that she is thinking to inform her mother-in-law about her new business. Kusum advises Preeti to not to tell her in-laws as they will surely refuse her to work.

Tarun blows the horn of his new car in front of Preeti, while Rati performs veneration for their new car. Rati meets Preeti and tells her that they are succeeding in their lives without any blessing from the mother.

Preeti feels happy for Tarun’s promotion, while K.T sent a car to pick up Preeti and her family from her home.