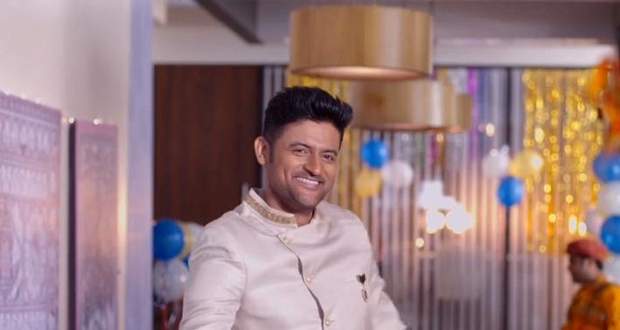 Today's Shadi Mubarak 17 Sep episode starts with K.T sending a car for Preeti and her family to come on the veneration. The driver asks Preeti to shut the car door tightly and Preeti recalls the time when Tarun insulted her for the same thing.

K.T welcomes Preeti and her family with the full celebration in his big office. K.T gives a tour of the office to them, while Preeti tells K.T that he should have not bought such a big office in the beginning.

K.T’s mother and aunt arrive there in K.T’s office for the inauguration and Kusum get very happy to meet K.T’s mother. K.T’s mother taunts Preeti for rejecting K.T’s business proposal at first, while Kusum questions K.T about his wife and his children.

Later, all the family members attend the veneration. The priest asks K.T to make Swastik on the pot along with his wife Preeti.

K.T’s mother scolds the priest for assuming Preeti to be K.T’s wife, while K.T makes it clear that Preeti is his business partner and not his life partner.

The priest asks Preeti to tell her full name and then asks K.T to tell his full name. Kusum and her daughter laugh on hearing K.T’s full name Keertan Tibrewal.

K.T asks Preeti to suggest a name for their new company. K.T’s mother asks K.T to decide the name on his own but K.T tells her that this business idea is of Preeti so she will decide the name.

Preeti tells K.T that she wants everyone to suggest the name for the company and everyone starts giving their suggestions. Later, Preeti and K.T think of the same name at the same time.

Everyone gets surprised to see K.T and Preeti’s understanding. K.T and Preeti ask the priest to write ‘Shaadi Mubarak’ in the name of the company.