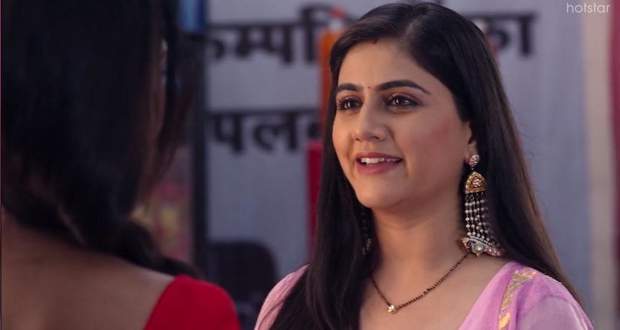 Today's Shadi Mubarak 18 Sep episode starts with K.T’s mother giving a gift to Preeti for her partnership with K.T. She talks about her luxurious lifestyle to Preeti and points out Preeti’s middle-class lifestyle.

K.T’s mother Neelima warns Preeti for her partnership with K.T, while K.T arrives there and asks Preeti and her mother to have lunch.

Kusum’s daughter gets excited about K.T’s big office and wishes that she also wants a business partner like K.T. Later, Preeti recalls Neelima’s words, and K.T bursts a balloon near Preeti to get her attention.

K.T asks Preeti to not to worry about the big office and shares his life experiences with her. He tells Preeti that he believes her capability and her talent.

The next morning, Preeti goes to the market along with Juhi and Kusum. Preeti finalizes a new tiffin for Piyu, while Kusum asks her to one tiffin for herself.

Kusum gets emotional on witnessing Juhi and Preeti’s love. Juhi gifts a Saree to Kusum, while Kusum goes to the next shop with Juhi.

Meanwhile, Tarun and Rati arrive at the same shop and Rati provokes Tarun against Preeti. She tells him that Preeti always tries to compete with her.

Tarun humiliates Preeti for competing to Rati and for buying the same bag as Rati. He insults her for not having any talent and for looking for a job.

He says a lot of harsh words to Preeti and humiliates her in front of everyone. Elsewhere, K.T makes a call to Preeti and asks her to come to the office.

Preeti rushes to the office in tension, while K.T asks Preeti to write down the rules of their business. Preeti follows everything said by K.T and then K.T starts laughing at Preeti for being so serious.

Upcoming Shaadi Mubaarak episode update: Preeti prays to God for helping her in every difficult situation.