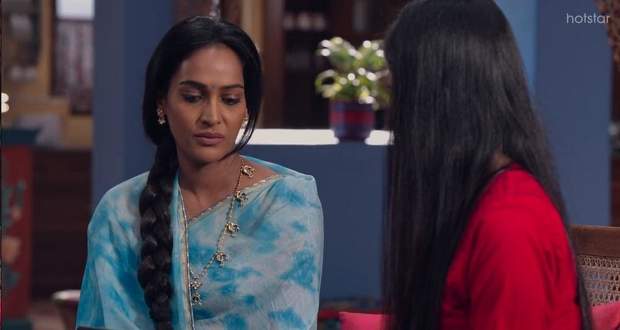 Today's Shadi Mubarak 19 Sep episode starts with K.T laughing at Preeti for being so serious. He asks Preeti to be calm and chill in her life to get good results in their business.

Preeti leaves from the office and reaches home, while Piyu shows her presentation to her sisters. Preeti compliments Piyu for her confidence level and asks her to give her some tips for her first day of office.

She expresses her fear, while Piyu advises Preeti to concentrate on her positive qualities. Meanwhile, K.T falls asleep in his mother’s lap and his aunt arrives there and talks about Preeti to Neelima.

K.T overhears their conversation and asks them to help him in doing the preparation for his first day at the office. Elsewhere, Preeti tells her qualities to Piyu and gets motivated by Piyu’s words.

Kusum overhears Piyu’s conversation with Preeti, while Piyu shouts at Kusum for always keeping an eye on her. Kusum gets angry and shouts at Piyu for talking to her rudely.

Later, Kusum helps Preeti in choosing her dress for the first day of her office. Elsewhere, K.T panics on not finding his favorite shirt and Neelima helps him by getting a new shirt for him late at night.

The next morning, Rati keeps on thinking about Preeti’s job and questions Tarun about what kind of job Preeti might have got.

K.T gets late for his first day at the office, while Preeti feels grateful to God for always helping her in every situation. Kusum wishes all the best to Preeti and Piyu for their first day of office.

© Copyright tellybest.com, 2018, 2019, 2020. All Rights Reserved. Unauthorized use and/or duplication of this material without written permission from tellybest.com is strictly prohibited.
Cached Saved on: Saturday 28th of November 2020 04:56:21 AM