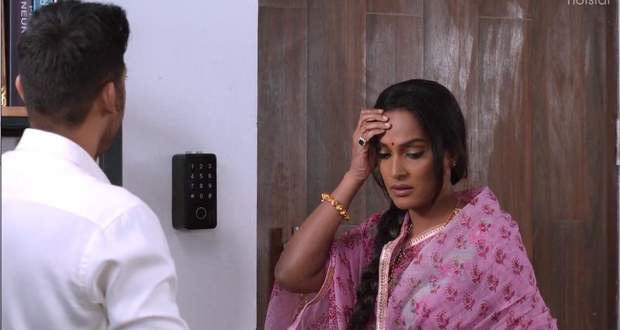 Today's Shadi Mubarak 21 Sep episode starts with Everyone wishing Preeti and Piyu all the best for their first day at the office. K.T’s family helps him in getting ready and to eat have his breakfast.

Preeti reaches the office before time and plans the schedule for the day sitting outside the office. She keeps on waiting for K.T and he gets extremely late in reaching office.

Preeti questions K.T about the staff and K.T tells her that she has to hire the people for the company. Preeti feels uncomfortable all alone with K.T and he asks her to come to his cabin.

K.T shows the digital lock to Preeti by locking his cabin from inside, while Preeti starts panicking and asks K.T to open the door immediately.

K.T forgets the lock pin and fails in opening the door. He makes a video call to his uncle and asks him to tell the lock pin which he noted down in a book.

K.T gets the pin and tries to open the door but the door gets temporarily locked. Meanwhile, Tarun gets to know that Piyu is the new employee in his company.

K.T starts dancing in a weird situation and Preeti asks him to give the number of the service center. She gets worried when she gets to know that the lock will be opened after two hours.

© Copyright tellybest.com, 2020, 2021. All Rights Reserved. Unauthorized use and/or duplication of any material from tellybest.com without written permission is strictly prohibited.
Cached Saved on: Friday 3rd of December 2021 10:33:56 PM