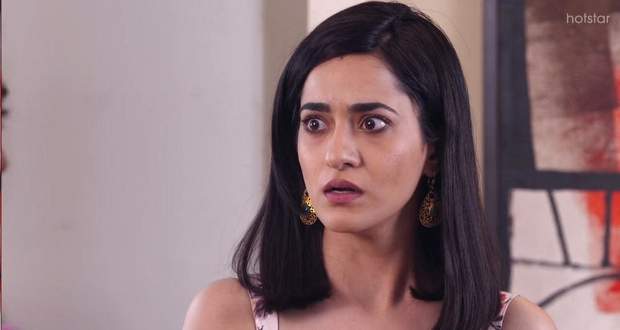 Today's Shadi Mubarak 22 Sep episode starts with Preeti getting tensed about being locked in K.T’s cabin. She asks K.T to begin their work for the first day.

K.T speaks some beautiful words in front of Preeti, while Preeti gets a call from Kusum and she tells her that K.T is gone mad.

Kusum tells Preeti that she asked K.T to send her a video of him speaking those beautiful lines. Meanwhile, Priyanka gets shocked to see Tarun on the first day of her office.

K.T gets his door unlocked by the service center staff. Preeti gets surprised to see that K.T has to bear so much expense on the first day.

K.T asks Preeti to write a script for the advertisement and informs her that they will shoot it the same day. He tells Preeti that she will take the interviews for the new staff.

Rati arrives at K.T’s new office to give the interview for the job. She compliments him for inaugurating such a classy office.

She tells him that she is currently working in Chanda Rathod’s company, while K.T recalls the time when Chanda insulted him. Elsewhere, Tarun tries to ruin Priyanka’s presentation and shows his pictures with her on the screen.

Rati informs K.T that Chanda took the credit of her marriage decorations and it was actually managed by her mother-in-law Preeti. K.T asks Rati to impress his business partner as she handles the recruitment process, while Tarun insults Priyanka for being a village girl.

He tells everyone that Priyanka was in love with him and she even proposed him for marriage but he rejected her proposal at that time.

Rati gets shocked to see Preeti in K.T’s office and assumes that she has got a cleaner job there. She asks Preeti to leave from the office otherwise she would be insulted in front of everyone.

K.T introduces Preeti as his business partner to Rati and this gives Rati a big shock. K.T asks Preeti to take Rati’s interview for the job.

© Copyright tellybest.com, 2018, 2019, 2020. All Rights Reserved. Unauthorized use and/or duplication of this material without written permission from tellybest.com is strictly prohibited.
Cached Saved on: Tuesday 24th of November 2020 12:06:07 AM