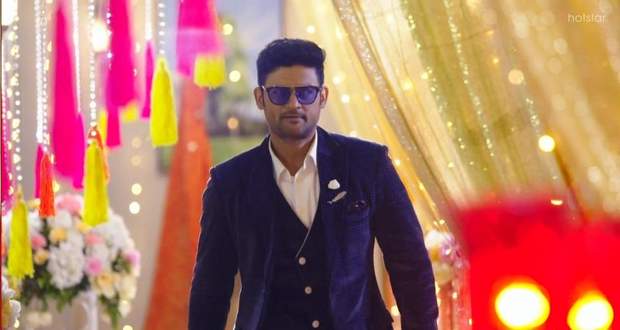 Today's Shadi Mubarak 25 Aug episode starts with Preeti recalling Tarun’s harsh words for her. K.T, a graceful actor arrives as a guest at the wedding and tries to lift Preeti’s spirit.

Rati asks Tarun to apologize to Preeti, while Rati introduces K.T as her guest. A reporter questions K.T about his wife, and he answers that his wife is in London.

Kusum requests Preeti to make her meet K.T as she is his great fan. Preeti follows K.T and asks him for a photo together, whereas K.T misunderstands that Preeti wants a picture with him.

Tarun’s grandparents make a video call to give their blessings to the newly married couple, while Tarun’s grandmother gets happy to hear Preeti’s voice after such a long time.

Juhi witnesses Rati’s event management company to take all the credits for the decoration, and she objects to it as she doesn’t want to give Preeti’s credit to anyone else.

Preeti convinces Juhi that she doesn’t want to take any credit and tells her that she is happy to see her daughter-in-law’s company to cover it.

After marriage, Preeti shifts to Rati and Tarun's house in Udaipur, while Preeti gives a warm welcome to the newly married couple.

Rati misbalance and holds Preeti’s hand for support, and it makes Preeti step out of the house. Everyone gets surprised to see Preeti standing outside during Rati’s Grih Parvesh.