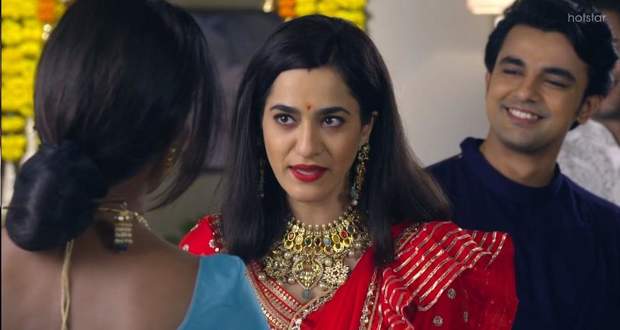 Today's Shadi Mubarak 26 Aug episode starts with Rati showing her house to Preeti after Gruhpravesh. Rati performs a ritual told by Tarun’s grandparents and requests Preeti to gift her a car.

Preeti feels bad and tells Rati that she has spent all the money in the marriage function. Juhi asks Preeti to not to feel bad and asks her to gift gold bangles to Rati.

Rati and Tarun get angry with Preeti as they were expecting half of the payment amount of the car from her, but Preeti couldn’t help them.

Preeti tells Juhi that she wants to sell her own house to get the money for Rati’s car. Juhi disagrees with her and asks her not to sell her house at any cost.

The next morning, K.T’s family notices an unexpected headline in the newspaper about K.T's presence in a marriage function the previous day.

Preeti asks Rati to make a sweet dish, whereas Rati disagrees and tells her that she doesn’t have time. Tarun informs Preeti that his friends invited him to lunch along with the family.

Preeti gets ready to go along with Tarun and Rati, while Tarun tells her that his friends have invited his family and only Rati is his family.

Preeti gets upset and tells Tarun that she is his mother and nothing gets changed after marriage. Rati tries to handle the situation and leaves for lunch along with Tarun.