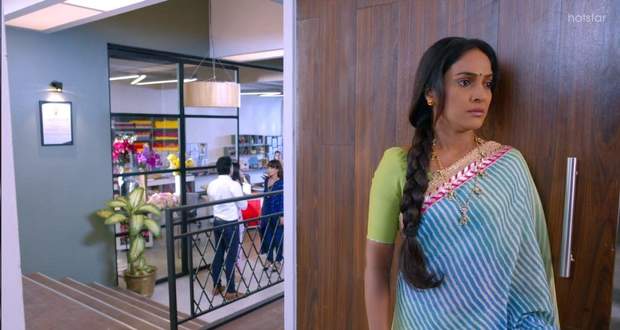 Preeti gets tensed when K.T keeps on taking and takes so much time in taking the almirah with him. She gets worried about thinking of Kusum’s arrival at the same time.

Meanwhile, Rati and Tarun reach Rati’s office and her boss Chanda Rathore congratulates both of them for their marriage. She gifts them cushions for their new luxury car.

Tarun asks Chanda to give incentive to Rati for giving their event management credit to her company. Chanda gets angry with Tarun and warns him not to ask for incentives for their low budget marriage.

Preeti panics on seeing Kusum outside the house and therefore, she asks K.T to pay the money and leave from there as soon as possible. Later, Kusum invites Preeti for a get together in her society.

Tarun makes a call to Preeti and asks her to bring his mobile phone to Rati's office. Rati sees Chanda’s expensive ring fallen on the floor and hides it in her purse. She witnesses Preeti in her office and secretly keeps the ring in Preeti’s purse.

Chanda shouts at her security guard to find her diamond ring. The staff starts checking everyone’s bags and finds the ring in Preeti’s purse. Preeti faces the accusation of being a thief and gets an idea that Rati stole the ring and placed it secretly in her bag.

Rati and Tarun apologies to Chanda for Preeti’s mistake and request her to not to call the police.

Upcoming Shaadi Mubaarak episode update: Tarun tells Preeti that he sold her village house to buy a new apartment in the city.