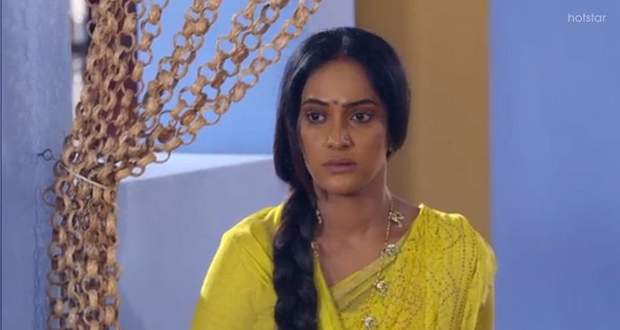 Today's Shadi Mubarak 2 Sep episode starts with K.T making a call to Preeti to ask if she’s fine. Rati attends the call and informs K.T that Preeti is fine and nothing to worry about.

Later, Rati complains to Tarun about doing the household chores in Preeti’s absence. Tarun tells Rati that Juhi’s mother-in-law would not let Preeti stay at her house for more than one day.

Sumedh asks Juhi to take Preeti to Pushkar at Uncle’s house to make her feel good. Juhi tells Sumedh that Kusum will not agree to let her go with Preeti.

The next morning, Preeti wakes up early and tries to find a temple in Juhi’s house. She witnesses Kusum with two cups of tea and thinks that one of them is for her.

Kusum makes the situation awkward for Preeti and drinks both the cups of tea. Juhi gets breakfast for Preeti and tells her that they both are going to Pushkar.

Preeti refuses to go to Pushkar and tells Juhi that she doesn’t want to listen to her uncle and aunt’s taunts. Juhi tries to convince Preeti, while Kusum overhears their conversation.

Sumedh sees her mother Kusum to get her permission, while Kusum pretends to have a headache. Sumedh and Juhi decide not to go to Pushkar as Kusum was not well.

Later, Kusum’s daughter tells Kusum that she knows about her fake headache. Preeti overhears their conversation and wonders why Kusum is faking her headache.

Kusum humiliates Preeti for not bringing her belongings from Tarun’s house. She keeps on making Preeti do the household chores to make her feel awkward.

Preeti decides to leave Kusum’s house so that Kusum would not get irritated by her presence. Meanwhile, K.T’s mother looks for a girl to get K.T married.

Kusum keeps on taunting Preeti for living at her daughter’s in-law’s house.

© Copyright tellybest.com, 2020, 2021. All Rights Reserved. Unauthorized use and/or duplication of any material from tellybest.com without written permission is strictly prohibited.
Cached Saved on: Thursday 28th of January 2021 06:39:28 AM