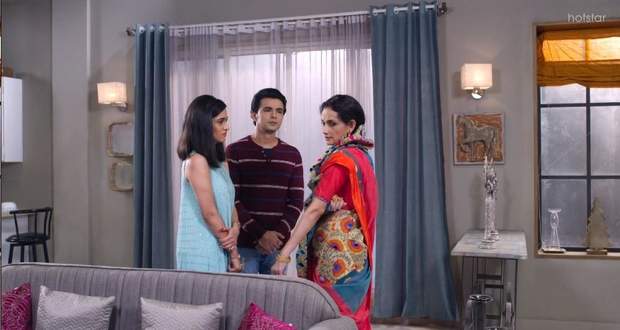 Today's Shadi Mubarak 4 Sep episode starts with K.T’s family bursting out of anger at Chanda for insulting K.T on rejecting her marriage proposal. K.T gets emotional and storms out of the house.

Kusum meets Tarun and Rati at their house, while Tarun tells Kusum that he understands it would not be easy for her to let her daughter-in-law’s mother live at her house.

Rati starts her emotional drama and asks Kusum to send Preeti back. She tells Kusum that she always keeps on thinking about Preeti and gets worried about her. Kusum informs Rati and Tarun that she has come there to take along all the belongings of Preeti.

Rati and Tarun get shocked to know that Preeti is living at Kusum’s house with peace and respect. Kusum advises Rati to hire a maid and asks her to start respecting her mother-in-law Preeti.

Meanwhile, Everyone gets shocked to see that Kusum went to bring Preeti’s belongings from Tarun’s house. Juhi feels thankful to Kusum and all of them spend a happy moment together.

Elsewhere, K.T recalls his past when his wife left him and ran away with someone else. Preeti witnesses a person sitting alone on the roadside and not attending his phone calls. She leaves a letter and a box beside that man sitting on the bench.

Preeti reaches home and finds Kusum shuffling the cards. Kusum tells Preeti that she used to play cards with her husband and they both used to spend their time with each other while playing the cards.

K.T’s mother keeps on messaging K.T and asks him to call her. K.T calls his mother and asks her to not to worry. K.T finds a box full of sweets and a letter on the bench on which he was sitting. He reads the letter and finds an inspirational message on it.

K.T eats those sweets and feels thankful to the person for showing him a ray of hope.

© Copyright tellybest.com, 2018, 2019, 2020. All Rights Reserved. Unauthorized use and/or duplication of this material without written permission from tellybest.com is strictly prohibited.
Cached Saved on: Tuesday 24th of November 2020 05:48:01 AM