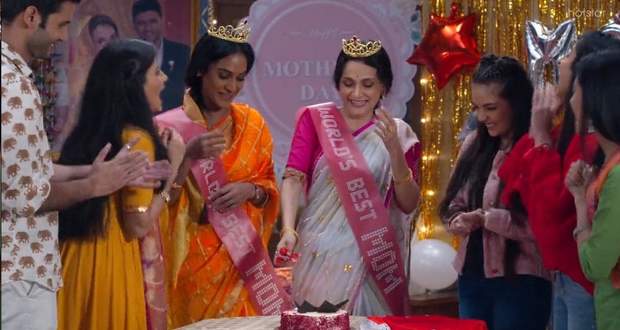 Today's Shadi Mubarak 5 Sep episode starts with Kusum and Preeti playing cards together. Kusum tells Preeti that she is her friend, and she can shift in her room.

Kusum tells Preeti to live her life without any restrictions and with full enjoyment. Later, Preeti recalls the stranger who was sitting on the roadside.

Meanwhile, K.T reaches his home in a very good mood and celebrates Mother’s day with his mother. K.T’s mother asks K.T to speak up what is in his mind.

K.T expresses his feelings and tells that he is very lucky to get a nice family. He asks his family to not to spoil their mood, and to always keep smiling.

The next morning, Kusum and Preeti go to the market to buy groceries and find Rati there in the market. Preeti thinks to help Rati, but Kusum stops Preeti from doing so.

Kusum tells Rati that her children have organized a party on account of mother’s day. Rati tries to provoke Preeti against Kusum and tells Preeti that it’s not a good thing to live at her daughter’s house.

Later, Preeti and Kusum reach home, and their children celebrate mother’s day with both of them. They all cut the cake together and enjoy it with each other.

Sumedh and Juhi tell their mothers that they want to gift them something and ask Kusum and Preeti to demand anything. Preeti tells everyone that she will demand something big, and she wants it at any cost.

© Copyright tellybest.com, 2018, 2019, 2020. All Rights Reserved. Unauthorized use and/or duplication of this material without written permission from tellybest.com is strictly prohibited.
Cached Saved on: Monday 30th of November 2020 07:05:49 PM