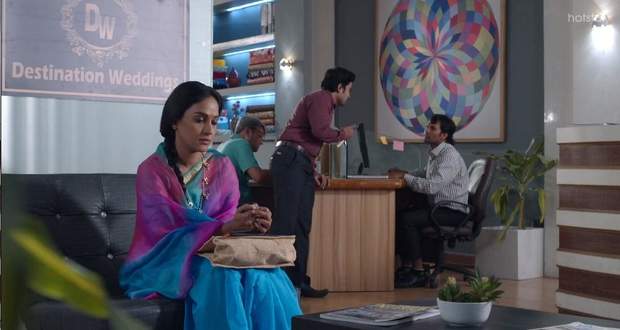 Today's Shadi Mubarak 8 Sep episode starts with Kusum and her family preparing a CV for Preeti’s interview. Juhi asks Priyanka to share her CV format to prepare a CV for Preeti.

K.T recalls the stranger who wrote a letter to him and makes a video to thank that stranger. Kusum shows that video to Preeti, while Preeti prays to God that she doesn’t want to have any connection with K.T.

Meanwhile, K.T’s uncle tries to make K.T understand that K.T should work again so no one can point out his capabilities.

Preeti tells Kusum that she is worried about how to find a job. Kusum gives a naughty example to Preeti to make her understand that finding a job is not a difficult task.

The next morning, Preeti gets ready to go for the interviews, while Kusum and her family wish Preeti the best of luck for her day. Later, Preeti meets Tarun on her way and tries to talk to him.

Tarun ignores Preeti and sits in the car, while Rati arrives there and taunts Preeti for staying at her daughter’s house.

Preeti looks for a job in many companies but gets rejected by everyone because of her age and fewer skills. Later, Preeti overhears someone talking about the biggest wedding planner Chanda Rathod present at City café.

Elsewhere, K.T and his mother bump into Chanda at the same café. Preeti arrives at the café to meet Chanda for the interview.

© Copyright tellybest.com, 2020, 2021. All Rights Reserved. Unauthorized use and/or duplication of any material from tellybest.com without written permission is strictly prohibited.
Cached Saved on: Thursday 28th of January 2021 08:38:29 AM