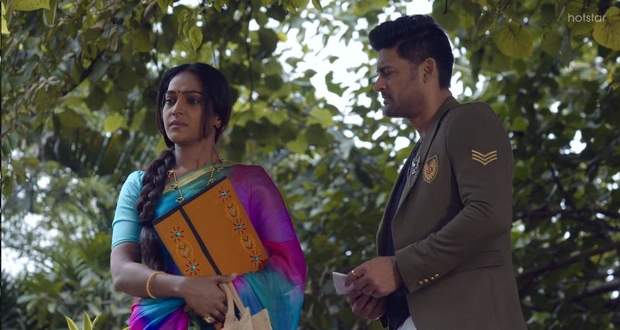 Today's Shadi Mubarak 9 Sep episode starts with K.T witnessing Preeti in the café. Preeti finds Chanda in an angry mood and still decides to meet her.

Preeti shares her unique idea with Chanda, while Chanda praises Preeti for the idea and tells her that she got the job. Chanda’s employee informs Chanda that Preeti stole her ring that day.

Chanda humiliates Preeti in front of everyone and calls her a shameless woman. Preeti tries to clear that she isn’t a thief and no one has the right to insult her.

K.T offers his help to Preeti by telling her that his mother runs an N.G.O for needy and dependent women. Preeti gets angry with him for calling her a weak and needy woman.

Preeti leaves from there, while K.T’s mother arrives there and asks him to come inside the café. Later, Preeti reaches Kusum’s house and decides to not to tell anyone about what happened in the café.

Preeti gets shocked to see her in-laws at Kusum’s house along with Rati and Tarun. Preeti’s in-laws taunt her for leaving her son’s house and for living at her daughter’s in-law’s house.

Juhi takes a stand for Preeti and tells her grandmother that she will not let Preeti go back to Tarun’s house. Her grandmother tells Juhi that Tarun has called them to convince Preeti to come back to his home.

Kusum gives a shock to Tarun and Rati by asking Tarun to add his mother’s name in the documents of his new house and to make Preeti a shareholder.