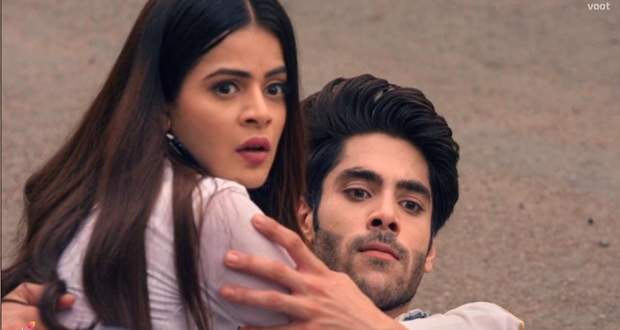 Today's Shakti Astitva Ke Ehsaas Ki 11 Sep episode starts with Heer hitting Virat with a cushion and telling him that she isn’t afraid of him. Virat leaves from there and Heer recalls her past memories with Virat.

Virat throws Somya’s diary as he couldn’t find answers to his questions in it. He sees a part of him talking to him about his feelings for Heer.

He tries to make him understand that Heer plays a very important life in Virat’s life. Virat starts shouting, while Jharna arrives in Virat’s room and tries to calm him down.

The next morning, Parmeet asks Jharna to come along with Virat for their Haldi ceremony. Jharna informs Parmeet that Virat is not in his room.

Meanwhile, Preeto scolds Rohan when he told Preeto that Heer went to the temple alone. Preeto asks about Soham and goes to his room to see him. She tries to wake up Soham, while Harak Singh stops Preeto from disturbing Soham.

Virat comes to meet Heer in the temple and apologizes to Heer for all his deeds and tells her that he wants to support and protect her.

He asks Heer to be his friend, while Heer slaps Virat for lying to her. She tells Virat that she doesn’t trust him anymore after his betrayal and asks him not to follow her.

Heer leaves from there, while Virat mutters that he will make sure to always protect Heer. Soham waits for Heer outside the temple so that he could shoot her.

Soham points the gun at Heer, while Virat comes in Heer’s way and asks her to join him for a coffee to have a conversation. Heer puts a condition in front of Virat and asks him to punish Nutan’s murderer.

Virat sees someone pointing a gun at Heer and runs to save her. Soham fires a gunshot at Heer, while Virat pulls Heer towards himself and saves her. Heer gets shocked to recognize that masked man as Sonam.

© Copyright tellybest.com, 2018, 2019, 2020. All Rights Reserved. Unauthorized use and/or duplication of this material without written permission from tellybest.com is strictly prohibited.
Cached Saved on: Thursday 22nd of October 2020 12:36:54 AM