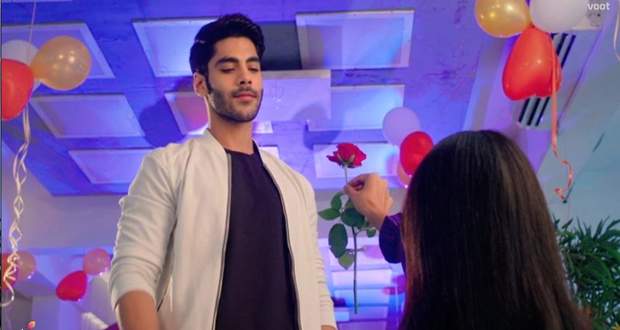 Today's Shakti Astitva Ke Ehsaas Ki 13 Aug episode starts with Virat getting a surprise from Jharna. She gets on her knees and proposes him with a rose and Heer is shell-shocked to witness this.

Virat’s friends force him to accept Jharna’s proposal as she already bribed them for supporting her to get Virat’s love.

Virat decides to hurt Heer by saying yes to Jharna’s proposal. The professor arrives there and asks Virat about what all is happening there.

Virat replies to him that this is the new beginning of his relationship with Jharna. Heer changes the topic and tells the professor that the team should now concentrate on the distribution of masks.

She feels pain when she thinks of Virat’s betrayal. She starts recalling all of her memories with Virat and gets emotional.

Later, she meets a girl Isha who tells her the truth of Jharna that how she bribed everyone by giving them brand new mobile phones.

Elsewhere, Parmeet is glad to hear that Virat accepted Jharna’s proposal. She asks the family members to plan a party for the celebration, whereas Gurwinder prays to God to save Virat from Jharna.

Harak Singh’s family spends some festive moments together while preparing for the occasion of Janamashtmi. Soham watches them from a distance and thinks of exposing them the same night.

In the college, Jharna misbehaves with Heer and snatches her sandwich. She asks everyone that if they’ve ever seen any couple doing crazy romance in the college.

She asks Virat to bite the sandwich from one side and she will bite it from the other side. Virat decides to do it so that he could hurt Heer, whereas Isha makes fun of their sandwich romance and Heer starts laughing on them.