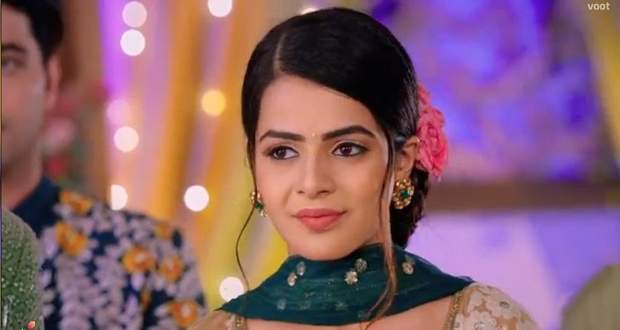 Today's Shakti Astitva Ke Ehsaas Ki 18 Sep episode starts with Soham asking Heer to prank the family with him. He asks Heer to do acting of crying and he will take her to the door at knifepoint.

Preeto and Harak Singh shout and ask Soham to leave Heer. Everyone gets shocked to see Virat at the door with a gun. Heer informs Virat that she is doing a prank with the family and asks him to drop the gun.

Preeto scolds Heer for doing a useless prank with the family, while Virat asks everyone to get ready for his Mehndi ceremony.

Later, Parmeet and Jharna get happy to see the beautiful decoration at the house. Gurwinder arrives there and Parmeet gets angry with her for not getting pregnant.

Elsewhere, Guewinder expresses her feelings with Daljeet that she is hurt by Parmeet’s taunt on her pregnancy. She tells him that she is going, to tell the truth to everyone that he is not capable of giving her a child.

Heer arrives at Virat’s house along with her family. Jharna asks Heer to apply Mehndi on her hands, while Virat keeps on staring Heer and recalls his past memories with Heer.

Virat sees some lights flickering and goes to fix them. Elsewhere, Shanno tells Soham that Harak Singh and Preeto will definitely plan something against them.

Virat gets an electric shock while fixing the wire. Heer rushes to save him and gets a wooden staircase to pull the wire fixed at the top.

© Copyright tellybest.com, 2018, 2019, 2020. All Rights Reserved. Unauthorized use and/or duplication of this material without written permission from tellybest.com is strictly prohibited.
Cached Saved on: Saturday 5th of December 2020 05:00:54 AM