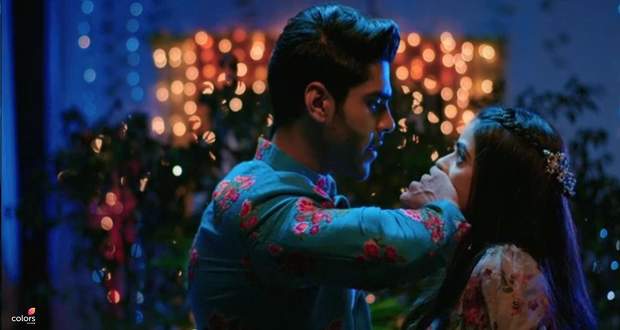 Soham tells Shanno that Heer will not reach her examination center, while Shanno tells him that Heer is never alone. Soham informs Shanno that he will kill everyone along with Heer.

Meanwhile, Heer daydreams of Virat coming to meet her in her room. She tries to concentrate on her studies to avoid thinking about Virat.

Later, Heer arrives at Virat’s Sangeet function while dancing on the beats. She gives a dance performance for the couple, while Virat takes Heer on the side to talk to her.

He tells Heer that he doesn’t want to marry Jharna. He expresses his feelings to Heer and tells her that he wants to marry her.

Heer says that she doesn’t want him to dump Jharna and asks him to be a responsible man. Virat tries to convince Heer and tells her that he wants to spend his life with her.

Jharna takes a promise from Virat that if he wants to keep their friendship for lifelong then he has to marry Jharna. Heer leaves from there and Virat sees Jharna coming to his side. He tells her that Heer left for her house and asks Jharna to say bye to her.

Soham goes for a walk late at night and Harak Singh follows him with a gun in his hand. Shanno tells Raavi that she is feeling happy to see Heer’s life getting ruined.

Raavi holds Shanno at knifepoint and warns her to not to think wrong for Heer. Elsewhere, Heer says bye to Jharna and tells her that she is genuinely happy for her marriage with Virat.

Virat stops Heer in her way and asks her to accept him in her life again but Heer refuses to him. She informs him that she has to leave as she has an exam the next day.