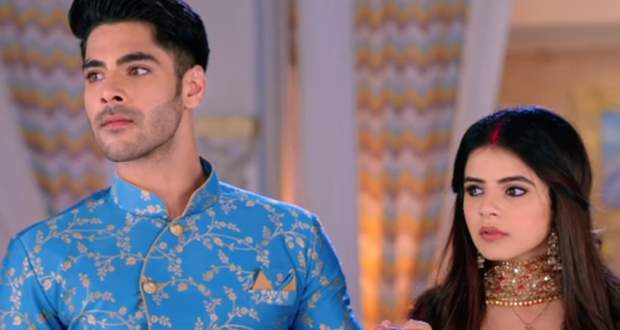 Virat calls Sant Baksh and asks him to meet in front of Heer’s house. He further says he might not be able to meet him after this. Later, Virat arrives at Heer’s house to prove his love for her.

Heer arrives at the same time and says Preeto is lying and she hasn’t even drunk a drop of water. Harak tries to interrupt Virat and Heer’s ritual but Sohum stops him.

Heer breaks her fast while Harak opposes the wedding. Sant Baksh also refuses to accept the wedding while Virat reveals they have decided to die together.

Heer and Virat take poison bottles in their hands and consume it. Heer and Virat fall unconscious on the ground while the family members get scared.

The doctor is also called and he asks everyone to maintain social distancing. He checks Heer and Virat and reveals the poison has to be removed from the body.

The doctor further advises them to treat Heer and Virat at home. Virat’s family takes him along after breaking free their hands.

Upcoming Shakti Astitva Ke Ehsaas Ki episode update: Parmeet reveals the Mahurat for the wedding and wishes to get Heer purified before the wedding.

© Copyright tellybest.com, 2020, 2021. All Rights Reserved. Unauthorized use and/or duplication of any material from tellybest.com without written permission is strictly prohibited.
Cached Saved on: Thursday 5th of August 2021 10:07:53 PMCached Disp on: Friday 6th of August 2021 03:17:47 AM