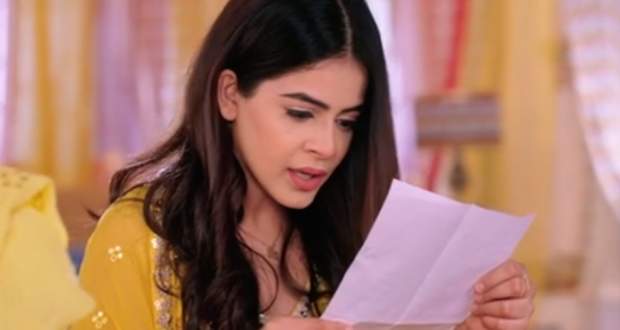 The priest starts the Pooja once Heer arrives. Parmeet leaves after the rituals are over while Preeto thinks she has done the biggest mistake by sending Soumya away.

At the same time, someone arrives in a Taxi at Heer’s house. Meanwhile, Heer misses Soumya and reveals she was always kept away from the world of the internet.

Heer wishes if Soumya would come for her wedding. A lady secretly enters the house while Shano feels someone’s presence behind a pillar.

Heer leaves the room while the lady enters and leaves a letter for her. She also leaves lipstick marks on Heer’s photo. Heer returns and finds various clues indicating the presence of Soumya.

Heer finds the letter and reads it. The lady leaves the house while Heer starts searching for Soumya in the house. Heer can’t find her Gulabo and reads the letter further in front of family members.

The letter states that Soumya doesn’t want Heer to get married. Soumya has further asked in the letter for Heer to choose between her and Virat.

Sohum is suspicious about the letter being from Soumya. Heer is devastated with Gulabi’s condition while Preeto leaves the decision for Heer.

© Copyright tellybest.com, 2018 & 2019. All Rights Reserved. Unauthorized use and/or duplication of this material without written permission from tellybest.com is strictly prohibited.
Cached Saved on: Thursday 6th of August 2020 01:01:46 AM