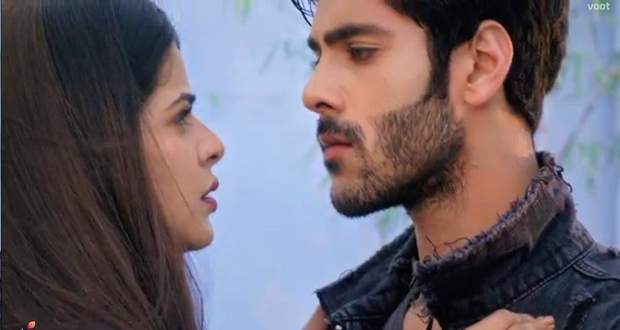 Today's Shakti Astitva Ke Ehsaas Ki 9 Sep episode starts with Heer requesting Rohan to let her see Nutan last time. Rohan consoles Heer and then locks the door from outside. Heer jumps off the window, while Mallika gets worried to know that Virat is arriving at Kareena’s place with the police.

Meanwhile, Soham arrives at Kareena’s place and pays her a good amount of money. Mallika gets shocked to see Soham there, while Soham witnesses Mallika looking at him and intentionally requests Kareena to leave the idea of kidnapping Heer.

Virat asks Mallika about Kareena’s address, while Mallika tries to make him understand that Kareena will disclose Heer’s identity if she gets arrested. Virat informs the police officer that he wants to withdraw his complaint and he doesn’t want to interfere in Kinnar’s matter.

Later, Virat stops Heer in her way and asks her to go back home. Heer asks Virat to leave her hand and to let her file a complaint against Nutan’s murderer.

Heer bites on Virat’s hand, while Virat forcefully lifts Heer in his arms and takes Heer to her home. Heer taunts Virat for not letting her file the complaint and for forgetting Nutan's sacrifice to save his life.

Soham scolds Heer in a bad manner and this makes Virat get angry on Soham for not respecting Heer. Mallika arrives there and informs everyone that Kareena escaped from her house.

Later, Mallika tells Preeto that she has sent Kareena to a place from where she can never escape without Mallika’s will. Preeto tells Mallika that she is worried because of Virat’s caring behavior towards Heer.

Virat recalls Nutan’s death and her last words when she told Virat that Heer loves him a lot. Virat gets a call from Preeto, while Preeto asks Virat to meet her near the temple.

© Copyright tellybest.com, 2020, 2021. All Rights Reserved. Unauthorized use and/or duplication of any material from tellybest.com without written permission is strictly prohibited.
Cached Saved on: Thursday 28th of January 2021 08:24:17 AM