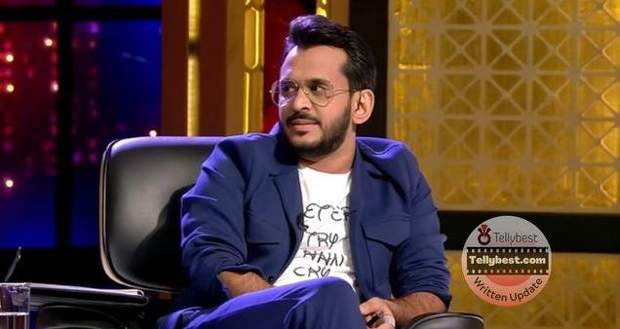 Inside FPV is a drone manufacturing company that wants to become the first Indian drone-making brand to commercialize its product.

The founders present themselves as Oishi COO, Arth CEO, and Devyant CTO with equal shares of equity in the company.

On being asked about their product, they say that their price ranges from 2700 rupees to 25,000 rupees.

After deducting the costs and taxes, there remain around 1000 rupees as their gross profit.

As Anupam Mittal asks them about their motto as a company, Arth says that they want to focus on the manufacturing of the products rather than being a service company.

Anupam Mittal gets out of the deal saying that their business is in a very early stage.

It gets revealed that Inside FPV raised funding of 25 lakhs and received 10 lacs from the Government of India.

Peyush Bansal and Aman Gupta give a deal to Inside FPV of 50 lacs at 20% and 25 lacs at debt without interest.

After discussion, Amit Jain and Namita Thapar present a deal of 75 crores at 15% but get a counteroffer for 75 lacs at 12% equity.

On the founders' request, the Four Sharks come together and close the deal at 75 lakhs at 15% equity.

The next entrepreneurs are two women with a unique clothing brand named Angrakhaa.

The clothing brand focuses on size customization so that the plus-size population does not feel isolated from the consumer range.

The founders introduce themselves as Asana Riamai and Vishakha Bhaskar who came together to start their company.

The sharks get shocked on hearing about the sales of 1.16 crores in the current financial year and compliment both the founders for their profit.

Angrakaa asks for 40 lacs at 5% equity with a valuation of 8 crores but only Amit Jain gives an offer of 40 lacs at 20%.

As the counter offer does not get accepted by Amit Jain, the deal gets closed for 40 lacs at 20% equity.

The next company is Diabexy run by a married couple named Lokendra and Nishu Tomar.

They ask for 1.5 crores at a 1% stake in their company, making the valuation reach 150 crores, which leaves the Sharks shocked.

Lokendra relays his vision of making India diabetes free in the near future with their food products ranging from sweets, and cookies, to atta and other things.

On being asked about the profit, Lokendra and Nishu say that they earn about 2.5 crores of profit after including their salary.

Amit Jain asks about the ratings of their products and gets a bit disappointed on hearing that they range from 3.5 to 4.

As Lokendra says that their atta is priced around 500 per kg, the sharks get shocked and state it clearly that the majority of Indians will not buy their item for its price.

Namita Thapar, Peyush Bansal, Aman Gupta, and Amit Jain make an offer for 1.5 crores keeping 20% equity but the deal does not work out and Lokendra and Nishu bid their goodbyes.

© Copyright tellybest.com, 2022, 2023. All Rights Reserved. Unauthorized use and/or duplication of any material from tellybest.com without written permission is strictly prohibited.
Cached Saved on: Wednesday 25th of January 2023 11:20:16 AMCached Disp on: Tuesday 31st of January 2023 07:27:02 PM