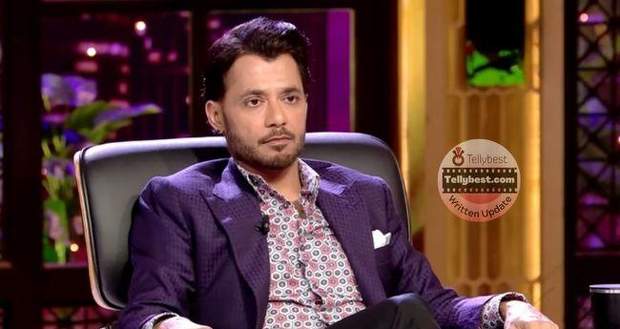 Anupam Mittal urges the sisters to talk in Hindi, and when they do, all of them get pleasantly surprised.

Aman Gupta jokes, by saying he thought he came on Shark Tank US set.

Rebekah tells the Sharks that their drinks are based to improve gut health and are made by fermenting green tea with yeast.

Atmosphere Kombucha demand 75 lakhs at 3% equity for a valuation of 25 crores.

The selling price of Kombucha is 220 rupees and Aman says it feels as if it is a "videshi" (foreign) concept.

However, the problem strikes when Namita Thapar questions them about what will happen once Kombucha reaches the distributor and for some reason, they aren't able to store it in a refrigerator.

Rebekah agrees with Namita and says that the Kombucha will then become sour.

Peyush Bansal, Aman, & Namita back out but Anupam gives them a deal of 75 lakhs at 20% equity with a valuation of 3.75 crores.

However, Rebeka and Ariella decline Vineeta's offer and give a counteroffer to Anupam for 75 lakhs at 8% equity but Anupam quotes it as impossible and wishes the sister the best of luck.

They tell the sharks that their product, STAGE, is an OTT platform that showcases web series, films, and other serials in local dialects of India.

Their annual subscription/recharge is 400 rupees per year. STAGE demands 3 crores for 1% equity for a valuation of 300 crores.

The Sharks become emotional when STAGE entrepreneurs reveal their previous company WittyFeed, which was the second largest company after Buzzfeed in the world.

However, one day, Facebook de-platformed them which used to fetch the most traffic.

Peyush Bansal asks them about their business model and the founders reveal that through Shark Tank, they want to raise funds and produce more content.

The STAGE founders accept the deal & Aman says this is what the identity of real entrepreneurs is for building a 300 crore company after losing one.

The third brand to introduce itself in front of the Sharks is Girgit, a color-changing magical clothing brand for kids & adults.

Started by a married couple, Pooja Shah and Benoy Shah, they utter a desire for 20 lakhs at 10% equity at a valuation of 2 crores.

Peyush asks them if Girgit name could have a negative connotation for their brand and Vineeta laughs and asks Peyush if someone ever called him a "girgit".

Pooja reveals that she is the CEO of Girgit and has built this brand under her husband's guidance.

Peyush backs out, including Namita and Anupam who ask them to strategically focus either on kids or on adults.

However, Namita offers Girgit a deal of 20 lakhs for 20% equity for a valuation of 1 crore.

Benoy makes a counteroffer for 20 lakhs at 15% equity but Namita denies and the deal is then accepted by the Shah couple for 20 lakhs at 20% equity for a valuation of 1 crore.