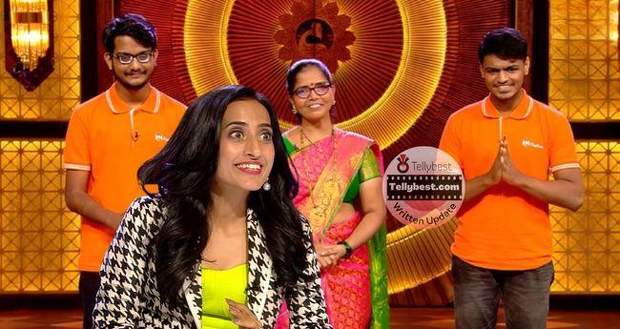 The co-founders, Nikhil & Mehr together impress the Sharks with their electric bikes and tricycles.

Nikhil reveals that he has been the founder of a cafe, and a company before starting Gear HeadMotors.

They demand 75 lakhs for 2% equity and quote their last year's sales of around 3 crores.

However, Aman Gupta & Namita Thapar catches them when they state that there will be two investors as they have made 2 companies.

Anupam Mittal also lets Nikhil & Mehr know that their numbers are wrong and backs out of the deal.

Aman says "sab gadbad hai" (everything seems upside down) and tells Gear Head Motors that they have an offer for them if they are willing to merge their companies.

Nikhil immediately agrees and makes an instant offer of 1 crore at 3% equity for a valuation of 15 crores but Namita feels that the trust factor has been broken.

Peyush and Aman accept their offer only on the condition that the companies are merged and the valuation remains the same.

Gear Head Motors move out of the set with happy faces accepting the deal of 1 crore at 6.67% equity with a valuation of 15 crores.

The next brand is PatilKaki introduced by Vinit Patil, Geeta Patil, & Darshil Savla.

It is a homemade snack business selling Modaks, Namkeens, etc. They demand 40 lakhs for 2.5% equity at a valuation of 16 crores.

Since it is a fast-moving consumer good, Namita questions them how are they thinking to increase the shelf life of products such as Modaks and Darshil says they will increase it by nitrogen flushing.

They quote the ASP (Average Selling Price) to be Rupees 650 with a gross margin of 55%.

Peyush gets impressed by the packaging including all the Sharks when they hear PatilKaki's current year's revenue is 3 crores.

Aman says he wants to go solo and offers them a deal of 40 lakhs for 5% equity with a valuation of 8 crores while Peyush joins Anupam in his offer.

Aman then revises his offer and quotes it as same as Anupam's but as a solo Shark.

However, Patil Kaki joins Anupam & Peyush for 40 lakhs for 4% equity with a valuation of 10 crores.

The third brand to enter is Brandsdaddy AFE (Auto Fire Extinguisher) which shows the Sharks their product which looks like a ball and ends the fire.

The founders Roshan Mishra and his wife Ankita Mishra demand 70 lakhs for 5% equity and tell their selling price to be 1000-1500 rupees.

All the sharks back out except Namita who offers the couple a deal of 35 lakhs for 5% equity & 35 lakhs debt @ 12 % interest with a valuation of 7 crores.

Roshan seems hesitant but Namita joins her hands together early when he makes a counteroffer.

Brandsdaddy AFE accepts Namita's offer of 35 lakhs for 5% equity & 35 lakhs debt @ 12 % interest with a valuation of 7 crores and leaves the Shark Tank India set with a smiling face.