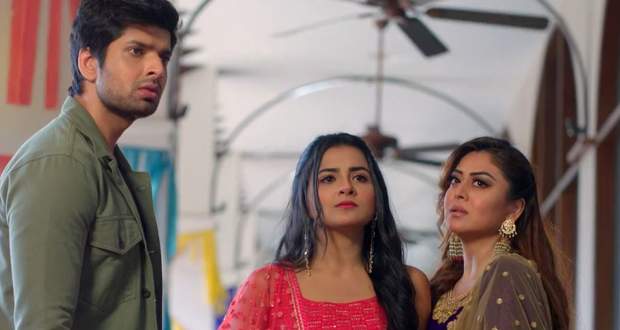 Today's Shaurya Aur Anokhi Ki Kahaani 26 April 2021 (SAAKK) episode starts with Shaurya asking Devi that he needs to talk to her but she refuses and everyone congratulates Shaurya.

Gayatri asks her husband about Tej and Shaan while Kanchan thinks that it is Devi’s plan.

Shagun shares her happiness while Devi asks Anokhi to say something about Shaurya and Anokhi.

Anokhi wishes Shautya and Shagun their happy life. She is devasted to hear about Shagun and Shaurya.
Babli and Aahir stop Anokhi and take her with them while Shaurya looks for Anokhi.

Devi tries to stop Shaurya from leaving. Shaurya confronts Devi for her announcement while she emotionally blackmails him.

Shaurya tells her that it is not about her but it is about himself and he had made plans to make this day special but she ruined everything. He further tells her that he does not love Shagun but loves someone else.

Babli consoles a broken Anokhi while Reema calls her to know about their whereabouts and informs Shaurya.

Shaurya comes to meet Anokhi while Aahir stops him from meeting Anokhi.

A fight indulges between them while Anokhi stops them and refuses to listen to Shaurya.

© Copyright tellybest.com, 2020, 2021. All Rights Reserved. Unauthorized use and/or duplication of any material from tellybest.com without written permission is strictly prohibited.
Cached Saved on: Sunday 9th of May 2021 04:42:57 AM