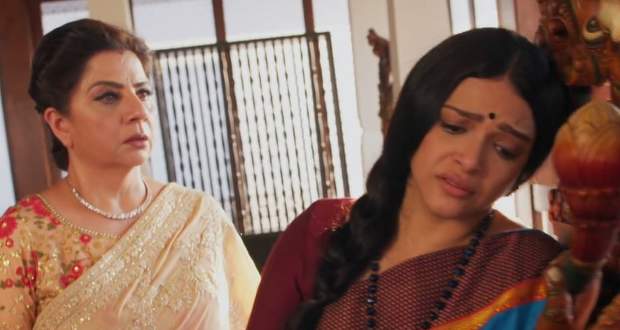 When Devi asks Tej to tell Aastha to leave, Aastha replies that she won't repeat her mistake which she made 25 years ago.

Meanwhile, Anokhi is suspicious of Vineet's actions while Babli asks her to leave him.

Aastha is concerned for Shaurya while Devi and Alok taunt her. Tej informs Aastha that Sabarwals will call the police so that they take immediate action.

On the other hand, Anokhi and Babli discuss their childhood memories and enjoy spending time together but Anokhi keeps thinking about Shaurya.

When Aastha consoles Devi who is concerned for Shaurya, Devi shares her worries about Shaurya and they discuss him. Shaan is restless thinking about Shaurya.

Kanchan slaps Vineet when he tries to misbehave with her while Babli and Anokhi watch them. Babli apologizes to Kanchan and takes Vineet away.

Further, Kanchan tells Yash to leave the issue. He asks not to spoil the mood because of him when he asks about Vineet.

Babli condemns Vineet when he tries to behave rudely with her and remembers Anokhi's words about standing for herself.

When Anokhi goes to check on Babli Vineet lies to her that she is sleeping while Babli is unconscious after being beaten up by Vineet. Anokhi is worried for Babli.

© Copyright tellybest.com, 2020, 2021. All Rights Reserved. Unauthorized use and/or duplication of any material from tellybest.com without written permission is strictly prohibited.
Cached Saved on: Sunday 2nd of October 2022 05:24:10 AMCached Disp on: Friday 7th of October 2022 03:03:46 PM