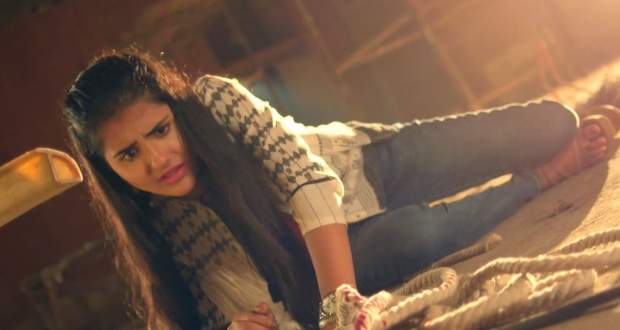 Today's Shaurya Aur Anokhi Ki Kahaani (SAAKK) 14 May 2021 episode starts with the Sabarwal family watching Shaurya in the video sent by the kidnapper and breaks down.

Tej agrees with Shaan of giving the money to the kidnapper in exchange for Shaurya.

Meanwhile, Anokhi confronts Vineeth for kidnapping Shaurya. Anokhi beats up Vineet's associate when he comes to threaten her.

On the other hand, Babli talks her heart out with Kanchan and thanks Kanchan for trying to cheer her up. Kanchan refuses to go with Yash and disconnects his call.

The kidnapper increases the ransom from 10 lakhs to 50 lakhs shocking the Sabarwals.

Anokhi does not listen to Vineet and decides to complain to the police. Vineet escapes from Anokhi when she warns him of causing any harm to Shaurya.

Anokhi feels guilty for not understanding Shaurya and cries thinking about him.

Meanwhile, Devi loses her cool after learning about the kidnappers' demands.

Vineet tells Babli that he is leaving for Chandigarh and asks her to not return to him. Babli shocked to know that Vineet had kidnapped Shaurya.

Anokhi informs the Sabarwals about Vineet being Shaurya's kidnapper after giving them his watch.

© Copyright tellybest.com, 2020, 2021. All Rights Reserved. Unauthorized use and/or duplication of any material from tellybest.com without written permission is strictly prohibited.
Cached Saved on: Tuesday 8th of June 2021 03:25:56 AMCached Disp on: Wednesday 16th of June 2021 12:59:53 AM