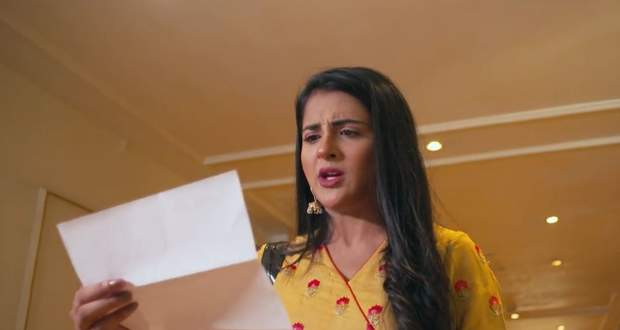 Today's Shaurya Aur Anokhi Ki Kahaani (SAAKK) 7 June 2021 episode starts with ACP Aahir asking Babli to forgive Anokhi as it wasn't her mistake and was in such a situation that made her marry Shaurya.

Anokhi gets worried as she tells Babli that her career may be at stake as there is a rule in college premise that no teacher and student relationship will be entertained in the college.

On the other hand, Devi shows everyone that Shaurya and Anokhi's marriage news is spreading all over the city.

Meanwhile, Shaan advises Tej to talk to Shaurya and Anokhi first and then come to a conclusion but Tej sternly refuses his advice.

Further, Shaurya spends quality time with Aastha over a feast.

Aastha shows few old memories from his childhood to Shaurya.

She tells him that in every happy or sad moment she was there for him and taking care by staying away from him.

Shaurya gets emotional and apologizes to her and feels guilty about misunderstanding her for so many years.

Later, Anokhi gets a rustication letter from the college.

Upcoming Shaurya Aur Anokhi (SAAKK) episode update: Anokhi challenges Tej that she will fight for her rights and tears off the rustication letter.