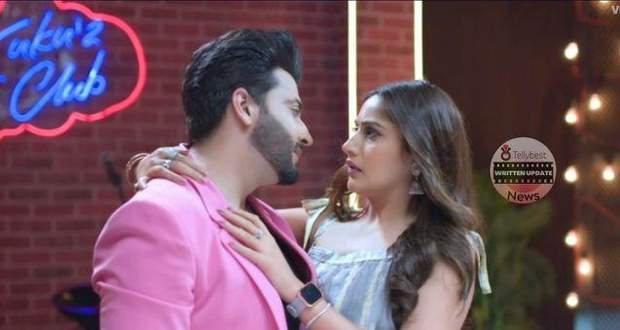 She further adds that she caught Raj rad-handed one time so he begged her not to reveal this to Bhairav.

While Bhairav looks shocked, Manmeet sarcastically announces that in just one month Raj ditched his two girlfriends and fell in love with her.

She even tells Bhairav that he can test Anmol’s DNA but pleads with him to stop the drama.

While everyone just stands there in silence, Manmeet reminds Bhairav that she only has an official relationship with him.

Manmeet then also adds that Bhairav is Mr. Yadav for her and she is Madam Shergil for him.

She then turns to Raj and calmly tells him that she needed to do this otherwise Raj would not have understood that they can never be together.

While Manmeet walks away from there, Raj stares at her with a gloomy look on his face.

Later, Nirali angrily yells that she cannot believe Manmeet called her son a mad person but Bhairav announces that Raj has stabbed him in his back.

Raj arrives there at the same time and apologizes to BhaIrav but angry Bhairav slaps Raj hard across his face and throws Raj out of the house.

The family members try to calm Bhairav down but Bhairav orders Raj to leave the house.

After Bhairav walks away, Raj stands there feeling disappointed while Nirali looks at him with helpless eyes.

On the other hand, Puneet confronts Manmeet about exposing Raj like this and Manmeet breaks down in tears.

Manmeet then tells Puneet that despite being the C.E.O of a company, she is a normal girl and she too has fallen in love with Raj.

Hearing this, Puneet questions Manmeet if she has feelings for him and then why she did it.

To this Manmeet replies that Raj loves her but she knows the Yadav family will never accept Anmol as their grandchild.

In a crying voice, Manmeet announces that she can live without Raj but she will not let anyone take Anmol away from her.

Puneet then hugs the crying Manmeet and Manmeet breaks down in tears.

In between sobs, Manmeet tells Puneet that maybe Raj will hate her for this but he will move on.

Elsewhere, Raj is looking at Manmeet’s desk with a sad expression.

The next morning, while everyone is eating breakfast, Raj arrives at his home and tells Bhairav that he just chased his dream to prove to Bhairav that the same fate will not happen to him.

Raj even gives Bhairav his passport and announces that from now on neither he will go to Sydney nor he will do stand-up comedy.

Raj then decides to leave but Bhairav embraces him in a fatherly hug and questions him if he has eaten anything.

Raj replies negatively and Bhairav orders him to freshen up.